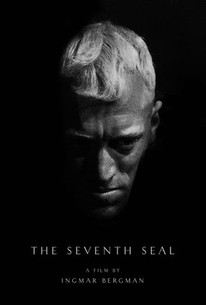 Disillusioned and exhausted after a decade of battling in the Crusades, a knight (Max von Sydow) encounters Death on a desolate beach and challenges him to a fateful game of chess.

Maud Hansson
as The Witch, Tyan

Ulf Johansson
as Leader of the Soldiers

Tor Borong
as Farmer at inn

Gudrun Brost
as Woman at inn
View All

You can hunt about in the history of the cinema and bring up a distant cousin or two for Bergman's great work. Yet, when all the delving is done, this film remains something quite distinct, a wonderful film which is not quite like any other.

Bergman's visually striking medieval morality play [was] the work that gained him an international reputation.

Swedish cinema titan Ingmar Bergman's mopey/earthy 1957 breakthrough The Seventh Seal may have done more than any other film to popularize and demonize the notion of world cinema as the boutique of the cultural intelligentsia.

Its view of a seemingly godless landscape in the grip of plague is still bold and frightening.

It survives today only as an unusually pure example of a typical 50s art-film strategy: the attempt to make the most modern and most popular of art forms acceptable to the intelligentsia by forcing it into an arcane, antique mold.

... questions the silence of God and service unto Him... (life) choices are shown to be one's own without passing judgment... this is the personification all other cinematic reapers are measured against.

The character that I enjoyed the most this time was the squire played by Gunnar Bjӧrnstrand. He is the most honest of all the characters but is also funny and bawdy.

Although Ingmar Bergman's The Seventh Seal is set in medieval Sweden, nothing could be more modern than its author's conception of death as the crucial reality of man's existence.

"The plague advances, implacable, and confusion and despair begin to reign". [Full review in Spanish]

An especially grey movie; funny and miserable, optimistic and fatalistic.

The Seventh Seal is a riveting, expertly-filmed, beautifully-written, and wildly intelligent exploration of Catholic and apocalyptic anxiety. Its existential dread and its haunting questions of purpose and the presence of God still feel real and as relevant today. The misogyny demonstrated throughout the film, however does not age well, and is an unfortunate product of both the time of the film's release and the age it seeks to portray. One could argue that the misogyny is intended to show the savagery of men, their sinful nature, and that Bergman was calling out this cruel reality.

Masterful picture directed by Ingmar Berman, The Seventh Seal explores themes in such a way that it makes you reflect. With striking images, incredible acting, The Seventh Seal is an accomplished work of drama, a film that resonates as one of the finest in the genre. Ingmar Bergman is a phenomenal director, and he uses the simplest of ideas to make a film. With this picture we get that and the subject he tackles is one that captivates the viewer and raises questions as well. That's the best type of film, a film that can make a viewer think about the film's message, and with the Seventh Seal we have a film that explores an idea, and evokes questions. Not only that, it tells a profound story, one that challenges views on death. Brilliantly constructed by Bergman, the film manages to be a stunning piece of cinema that can resonate with the viewer. I've seen my fair share of foreign films, and I would say that The Seventh Seal is a fine accomplishment in film, and Ingmar Bergman manages to create something captivating due to its subject. If you enjoy thoughtful films, then The Seventh Seal is a picture not to be missed. The film is steadily paced, and it works well due to its acting, story and direction, and Bergman is able to make something grand with the basic aspects of filmmaking techniques. I thoroughly enjoyed the film, and if you enjoy a though provoking drama, The Seventh Seal works well, and is an engaging picture from start to finish. I thought that this film was wonderful, and is a definite classic of cinema.

For its time, Ingmar Bergman's iconic "The Seventh Seal" was revolutionary for its blatancy in showing the absence of God but the presence of Death. Much of what comprises this film; is not what those who know of it would attribute to it, visually speaking. Most people can only think about the visual of a knight on a beach, just back from the Crusades, the ocean suddenly silenced when a dark figure reveals himself on the horizon. It is Death, cloaked all in black, his white washed face standing out against the backdrop of pure nature. They play a game of chess for the knight's life, and so the film begins. Past that most people don't know much about this film. For one thing, there is very little chess featured in this film. For another, the knight has a comrade who he travels with. They go through the countryside, where the Plague has laid siege to all peoples. Everyone has become mad and frightened at the prospect of death, and belies religion's influence for some help in the matter of their mortality. A large amount of people believe in the religious fervor that is sweeping the countryside, and lend themselves to self-abuse, crucifixions, and murder. Others try to steal from the dead and help themselves through the devastation of the illness. Everyone seems to be trying to find answers to why there is war, poverty, and illness when God is supposed to protect them from their woes. A girl is captured and confesses to consorting with the Devil, which she says brought about the plague. She is only an innocent, content in turning from her God because of his absence, but not really a conspirer with evil. The film encourages exploration and takes a step back from theology by showing the very evils it inflicted in the past. Still, there is a call for people to also keep their faith in the face of Death, even while he's playing chess across from you. There's also a young couple who are very friendly and giving, and their fates are sealed thanks to their faith and love for one another. Bergman may not have known the infinitesimal questions that come from exploring your own doubt and frustrations with life. Though Bergman continually questioned himself in his later films, there is never an answer, only the freedom to question at all. Bergman went on to make films that were much subtler and less apt to rest itself on thoughtful images, but this was the start of his career and the first instant of his genius. If anything it should be commended for its innovation to film and the questions it raises.