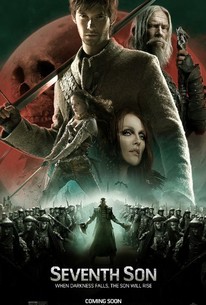 In a time long past, an evil is about to be unleashed that will reignite the war between the forces of the supernatural and humankind once more. Master Gregory (Jeff Bridges) is a knight who had imprisoned the malevolently powerful witch, Mother Malkin (Julianne Moore), centuries ago. But now she has escaped and is seeking vengeance. Summoning her followers of every incarnation, Mother Malkin is preparing to unleash her terrible wrath on an unsuspecting world. Only one thing stands in her way: Master Gregory. In a deadly reunion, Gregory comes face to face with the evil he always feared would someday return. He has only until the next full moon to do what usually takes years: train his new apprentice, Tom Ward (Ben Barnes) to fight a dark magic unlike any other. Man's only hope lies in the seventh son of a seventh son. (c) WB

Candice May Langlois
as Mother with Infant

Simon Burnett
as Boldmere
View All

You have to admire a movie which takes a gold-star cast (Julianne Moore, Jeff Bridges, Alicia Vikander) and creates such an unpolishable turd.

It's a real problem when one of your leading characters sounds like a cross between Bane, the masked mutterer from The Dark Knight Rises, and a man competing in a hard-boiled-egg-eating contest.

It's lively and daft, and you find yourself wondering: all this expertise, and the best anybody could think to do with it was this?

Would it even have been improved if we could actually hear the dialogue? Probably not.

You leave the cinema wishing you'd understood even less of it than you did.

It's also near impossible to enjoy this movie without visions of Lord of the Rings and Game of Thrones dancing through your head.

Seventh Son is a pretty by-the-book fantasy tale. The young apprentice storyline is a common one, so there aren't a lot of surprises when it comes to the plot. For me...it depends on the execution, and this is where I think the movie succeeds...mostly

It's too often a chore to make out Seventh's beautiful countryside and cast members through the frequent eye rolls that some truly terrible dialogue and a limp love story induces.

It's overly theatrical, like a stage production of a Shakespeare play, but that type of vivacious, physical acting doesn't translate well to the screen. It feels distractingly amateurish, even making it difficult to focus on the story at all.

About as pedestrian as a fantasy film can come, with the script full of the obligatory check marks and Sergei Bodrev's direction about as flat and uninteresting as possible.

All the elements are here, but no one much gives a damn in this sorcery and swords offering set in the Middle Ages. Is it the writing? The directing? You be the judge. The actors, lead by Bridges and Moore, seem to be trying to infuse something, some life, into this, but it just doesn't take off is all.

This was definitely a movie filmed by cameras. My favorite part of this experience was the Lime Cherry Icee that I drank.