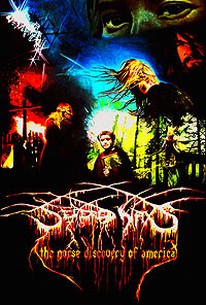 In the 11th century, Vikings, Indians, and Irish monks collide on the shores of North America in a historical epic adventure of exploration, personal glory, and religious dominance. Abandoned by a Western exploration party and stranded in the New World, two lone Vikings wade through a grand primeval landscape, struggling for survival while still in the grip of their Norse ways. An impressive DIY epic, "Severed Ways" features a frosty black-metal soundtrack, including Burzum, Morbid Angel, Judas Priest and Dimmu Borgir.

David Perry
as Monk No. 1

News & Interviews for Severed Ways: The Norse Discovery of America

View All Severed Ways: The Norse Discovery of America News

Critic Reviews for Severed Ways: The Norse Discovery of America

Impressive and also absolutely ludicrous, this is the movie you need to recommend to that suburban metalhead cousin in desperate need of having his mind blown.

Stone's admirable and persuasive evocation is unfortunately marred by his self-defeating resort to flurries of claustrophobic, fragmented hand-held shots that obfuscate just about every crucial plot development in the film.

That director Tony Stone concocted and nearly pulls off this gruff, truly indie flick, maintaining our interest -- mostly -- through slow, wordless curio makes him a director to watch.

Severed Ways is one of the oddest movies I've seen in a while -- and that's a good thing.

If nothing else, Mr. Stone, from his tangled hair to dirty feet, has taken himself and his story into the beyond -- way, way beyond.

Largely lacking in dialogue (if not unintentional hilarity), this intensely personal project is proof positive that Bill and Ted grew up to become filmmakers.

Severed Ways - a moviegoing experience steeped in history, the beauty of nature, and man's instincts for survival as he embraces a brave new world, not to mention some really cool Viking lore.

Herzog has found a kindred spirit in Tony Stone, and this is probably the only film I can immediately think of in which the great German director's cinematic sensibility has been sustained and not merely homaged.

More or less what you'd have if Ingmar Bergman had shot The Blair Witch Project...

Severed Ways exudes a specific and unique vibe, and youre either going to get into it or youre not...If youre willing to just stop, look and listen, you might have a good time.

One of the more beautifully shot films of the year...so long as the camera is standing still.

Audience Reviews for Severed Ways: The Norse Discovery of America

"Severed Ways" is an almost entirely wordless long-form video set to Metal and Goth music. It tries to imagine what it must have been like to be a Norseman exploring North America in 1000 AD. Writer/director Tony Stone (who also plays the lead role) appears to know a lot more about music than filmmaking, screenwriting or acting. Mostly what you get is interminably long scenes depicting such things as the building of a house. There are also many endless sequences depicting our two Norse heroes walking through the wilderness. One thing the film does do is evoke a mood. You really do feel like it's 1000 AD and you're in a forest. The film does get more interesting as it goes, with our Noresemen encountering two Christian monks and then a couple of natives. But as soon as something interesting starts to happen in these storylines, Stone reverts to another panoramic nature sequence. He seems to be allergic to thought. It's too bad, because I get the sense that he's got some interesting ideas somewhere underneath all that hair.