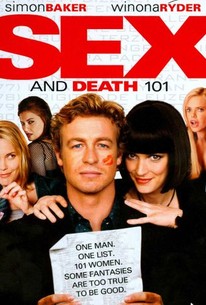 Critics Consensus: Sex and Death 101 aspires to be a clever sex comedy, but has little life behind the sex or the death.

Critics Consensus: Sex and Death 101 aspires to be a clever sex comedy, but has little life behind the sex or the death.

Critic Consensus: Sex and Death 101 aspires to be a clever sex comedy, but has little life behind the sex or the death.

Upon receiving an e-mail containing the names of every woman he has ever slept with and every women he will ever sleep with, a man set to be married in just one week eschews his wedding plans in favor of seeking out the truth behind the perplexing message in a black comedy written and directed by Heathers screenwriter Daniel Waters. Roderick Blank (Simon Baker) was prepared for a future of predictable, domesticated bliss -- but fate has a funny way of shaking things up when we least expect it. When a mysterious message appears in his inbox and he sets out to discover the origins of the strange communication, he soon finds himself falling for a dangerous black widow named Death Nell (Winona Ryder), who isn't on the list. ~ Jason Buchanan, Rovi

News & Interviews for Sex and Death 101

Critics Consensus: Leatherheads Has its Ups and Downs; Nim’s Island is Stranded; Guess The Ruins‘ Tomatometer!

View All Sex and Death 101 News

Critic Reviews for Sex and Death 101

Heaven help a writer who turns a philanderer into a blank.

As a writer, Waters is best-known for creating Ryder's sharp black comedy, Heathers, and Bruce Willis' self-indulgent bomb, Hudson Hawk. As a director, he tends to waste actors, and he fails to establish a consistent comic tone.

There are a lot of laughs, good performances, and points for creativity.

Waters is trying to have his cake and eat it out too.

This film is headed quickly for DVD. In the video store, though, it isn't funny enough to be shelved in the comedy section nor dirty enough to be filed with the smut.

Admittedly, it doesn't have many belly laughs, but if you're tuned into Waters' peculiar, highly intelligent comedy style it's a fascinating watch.

Sex and Death falls into the category of those unfortunate films in that it's a schoolboy's wet dream slathered in smug self-back patting and wish-fantasy run amok, all told with the deftness of a piano falling out of the sky and onto our heads.

A fun, sloppy treatment of a profound premise that, as a reunion project between Waters and Ryder, feels right.

Now we know how the dopes in the beer commercials spend their time when they are not drinking their beer. They laugh their socks off at movies like this.

Audience Reviews for Sex and Death 101

I enjoyed Sex and Death 101 much more then I thought I would, not only because of Simon Baker but because I found the film itself was very enjoyable to watch and had a few good belly laughs to boot (one in particular had me laughing throughout most of the rest of the film). Don't watch Sex and Death 101 If you are looking for an average popcorn munching comedy film watch it if you are looking for something a bit different and perhaps odd yet still enjoyable. I was lucky enough to pick it up due to my undying love of Simon Baker and I'm happy I did.

weird. not that funny, just sorta of meh. it was a good idea done in that horrible indie film way.

Man this was really a weird movie :O Didn't like anything about it.

It's not very often that I get the privilege of seeing a film as terrible as Sex and Death 101. I thank everyone for the opportunity to see what crap looks like first hand and appreciate the effort that didn't go into this movie. The film is about Roderick Blank (Simon Baker) who gets an email listing all of the women he has or will ever have sex with. So what does he do with this information? He proceeds to lay more pipe than a plumber while awing his friends at his sexual conquests. When it's finally revealed that Rodericks last conquest on his list is a Black Widowish killer Death Nell (Winona Ryder) it's almost a race to not get laid in this unfunny spectacle from director Daniel Waters. The way the movie plays out is about as interesting as a late night infomercial about Spam. Here's the movie in a nutshell: Gets list, has sex, has sex, repeat one and two. If there was actually anything funny in the film it might have been interesting, but we're left with the same stupid quips and the screenwriters passion for films from 1971. Add to this the fact that this film is close to the two hour mark and you get a ridiculous beating to the head as the same schtick continues over and over again. The acting sucks, but not as bad as the screenwriting which tries to be high brow but ends up being just a low rent Skinemax screw movie.