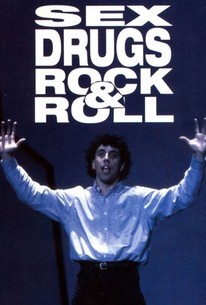 Shot over the course of several live appearances by comedic performance artist Eric Bogosian, Sex, Drugs, Rock & Roll is a filmed record of the Off-Broadway stage show of the same name. Against an economical, minimalist set, suggestive of harsh urban environments, Bogosian performs a number of satirical monologues, becoming a number of widely varied characters simply by assuming a different voice and physical stance. The characters sketched provide a cross-section of life in the big city, from a loquacious panhandler working the crowd on the subway, to a wealthy, high-powered entertainment lawyer closing a big deal while juggling the demands of his wife, his new mistress, and his racquetball partner. Other segments include the retelling of a raucous, drug-filled bachelor party, a radio interview with a hypocritical, pretentious, faux-environmentalist rock star, the gleeful confession of an unrepentant Casanova, and the rambling, paranoid musings of a downtown artist. Director John McNaughton and cinematographer Ernest Dickerson vary the visual style from monologue to monologue, using camera movement and changes in composition to reflect the mood of the piece while remaining true to the simplicity of the theatrical conception.

Andy Serkis uncoils a performance of spit, grit and wit so ferocious it only serves to starkly clarify how unremarkable and formulaic the rest of the movie is.

Eric Bogosian puts on an energetic one-man show of impersonations and satirical monologues.

A scary overview of the dark side of the male psyche where paranoia, misogyny, and compulsiveness reign.

There are no featured reviews for Sex, Drugs, Rock & Roll at this time.