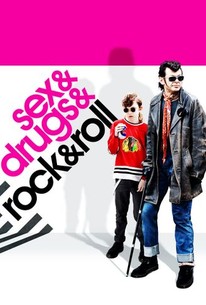 Critics Consensus: Sex & Drugs & Rock & Roll pays appropriately uninhibited tribute to a pioneering artist -- and proves Andy Serkis can be every bit as compelling in a non-motion-capture role.

Critics Consensus: Sex & Drugs & Rock & Roll pays appropriately uninhibited tribute to a pioneering artist -- and proves Andy Serkis can be every bit as compelling in a non-motion-capture role.

Critic Consensus: Sex & Drugs & Rock & Roll pays appropriately uninhibited tribute to a pioneering artist -- and proves Andy Serkis can be every bit as compelling in a non-motion-capture role.

Andy Serkis stars as volatile British new wave icon Ian Dury in this biopic from BAFTA-nominated director Mat Whitecross (The Road to Guantanamo). As a young boy, Dury nearly died after being stricken with polio. Though the ravaging disease would leave him permanently disabled, however, it would also instill him with the drive and perseverance to become one of the most influential musicians of his generation. Along with his band Ian Dury & the Blockheads, the unpredictable rocker would become a key figure in the new wave movement of the late '70s. But through it all Dury's abrasive behavior never subsided, even during quiet moments with his delicate young son, Baxter (Bill Milner). Ray Winstone, Naomie Harris, and Olivia Williams co-star. ~ Jason Buchanan, Rovi

A cringe-worthy script chock-full of clichés.

This hard-nosed drama comes across like one of those BBC4 hatchet jobs on iconic Brits.

If only the words I want to use to describe [Andy Serkis'] performance - charismatic, compelling - also applied to the movie around him.

Stands up pretty well as a celebration of Dury.

The acting generally is first-class, but what holds the film together is the performance of Andy Serkis.

Andy Serkis uncoils a performance of spit, grit and wit so ferocious it only serves to starkly clarify how unremarkable and formulaic the rest of the movie is.

The movie certainly had its moments, but Sex & Drugs & Rock & Roll simply fails to take many risks.

A clown-ish rock flick that we'd rather soon forget.

Even if nothing in the rest of the film quite matches that opening bravado and skill, it's a perfect opening salvo for a film that, even if it doesn't really know where it's going, has plenty of clever style while getting there.

Whether he's being charming or wretched, Serkis delivers a 100-watt performance that perfectly matches the cheery, jagged visuals.

Serkis is never less than ace.

Largely entertaining, but not without fault, much like Drury himself.

Inside this strange little movie is a rather decent one. The editing style is a little out there, but it's mostly filled with a well casted, well done, well acted story. It is a story of a man who survived polio as a child, and became a punk rockstar. Serkis is good giving realistic grit to the self-absorbed leading man. I am a sucker for pics about musicians, and I found this to be an enjoyable one.

Andy Serkis gives a brilliant performance as Ian Dury, a rock star that managed to have a fairly successful career despite having caught Polio as a child and having a wife and two kids. Its his determination that makes the film so compelling as we see gigs, both good and bad, fights, tantrums and the sex, drugs and rock n roll of the title as we see Dury start a new relationshp, make lots of money, have relationships break down as well as trying to keep his family close. Its sometimes touching, fun and funny as well as being intense and dramatic in parts with good performances also from Naomie Harris and Olivia Williams. A great rock n roll drama.

A brilliant performance from Serkis and some interesting directorial flourishes make this an engaging watch, but a bit of a soulless experience. Dury comes off as a bit of a git, which he probably was, but that doesn't make it easy to relate to him and the film. Of course the music is great and it's got a stellar cast but trying to justify Dury's attitude was the consequence of a disturbed childhood is a bit of a cop-out and we've seen that done hundreds of times before on film.

Andy Serkis IS Ian Dury in this bio-pic of the flawed polio'd punk-poetical genius. Einstein can't be classed as witless. He claimed atoms were the littlest. When you did a bit of splitting-em-ness Frighten everybody shitless There ain't half been some clever bastards (Lucky bleeders, lucky bleeders) If you've never heard of Ian Dury or his Blockheads, then you won't get much of an idea from the random snippets of music in the film, and if you're not a fan, this possibly won't convert you either. But if you remember him fondly, watching SEX AND DRUGS AND ROCK N ROLL is the next best thing to the man himself coming back to gobby feisty life.