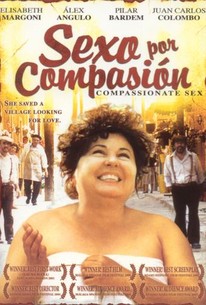 The healing power of the sexual act is the focus of this magic-realist entry, shot in Mexico and produced in Spain by writer-director Laura Mana. Evoking films as disparate as Wings of Desire, Like Water for Chocolate, and Breaking the Waves, Sexo Por Compasion switches from black and white to color as it relays the tale of Dolores (Elisabeth Margoni), a woman who begins a series of affairs after her husband walks out on her. She begins her trysts "out of compassion," as it were, for men who have been wronged by their women. As word of her carnal benevolence spreads, Dolores notices her small village changing: the invalid Leocadia (Leticia Huijada) is suddenly able to walk; a feuding couple makes amends; and Dolores' suitors donate money to the local church. Everything goes well until the local prostitutes accuse Dolores of noodling in on their business. Sexo world-premiered at the 2000 Malaga Film Festival before moving to festivals in Canada and the U.S.

There are no critic reviews yet for Sexo va, sexo viene. Keep checking Rotten Tomatoes for updates!

There are no featured reviews for Sexo va, sexo viene at this time.