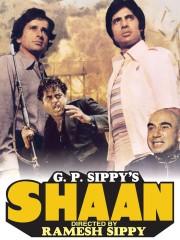 Laura M
August 22, 2015
This thing was ludicrous but in a good way. Goofy without getting too goofy. It was worth watching

Akhil A
June 25, 2011
One of the best cinematography in Indian cinema....with the best names in Bollywood in it...from Amitabh, Shashi Kapoor, Kulbhushan Kharbanda, Shantrughan...great story by the legendary Salim-Javed...music by R D Burman...a must watch for anyone who wants to know about Bollywood movies...

My fav song in the Movie stays Naam Abdul he mera with Mazhar Khan and Mohd Rafi s voice. What a combination.

I like watching Amitabh old Movies, but he should now retire. Amitabh had a Style .....Once upon a time.... but he has lost that touch and now he is just an old man who just doesnt want to retire, I just shake my head everytime when I see him Dancing with young girls nowerdays.

Shaan is not a bad Movie, it has a tiny bit of everything but my
Big complain it has a lots of Villain talking Nonsense.

I have never saw a Movie with a Villain talking like a Parrot! I just forwarded the part every time Kulbushan appeared on Screen (who played Villain, mostly threatning with his idiot Buttons. If I push this Button and push that Button....*roll eyes* annoying)
Jesus Christ what did they think when they wrote the script for the Villain anyway?

The other thing what I even noticed the Song Scene of Yamma Yamma, what the makers of shaan wanted couldnt exactly manage, but in Sholay there was this touch of an Idea I could see in the song "Mehbooba Mehbooba) I thought oh right something similar. Sippy managed that Song Scene Perfect and atleast there was a Villain with real threats a NO BUTTONS in sholay. Thank you for that Sippy.

I chuckle with the thought if someday with all his "dance moves" the 70 years old Amitabh`s dentures don't tilt drop down.

Pranav K
May 11, 2010
Parveen Babi's small role as a thief was the best part. Of course, the makers of Sholay went all out to make a fearsome villain with expensive, elaborate, and impressive sets for Shakal's secret lairs. While the first half was kind of nice, the second half became a complete drag.