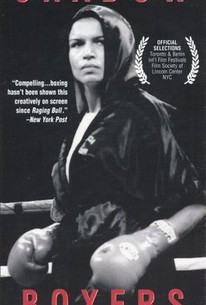 While boxing was once an exclusively male sport, that's not longer the case, and filmmaker Katya Bankowsky offers an inside glimpse at the small but growing world of female boxing in the documentary Shadow Boxers. Bankowsky starts by following a group of aspiring female pugilists, eventually centering on two: Jill Matthews, a tough and quick-witted Golden Gloves champion, and Lucia Rijker, a high-ranking European kickboxer who has come to the United States hoping to a pursue a career in sports (or the movies). Rijker became the first female fighter to sign with promoter Bob Arum, and Bankowsky documents both her skills in the ring and her effortless charm and intelligence. Shadow Boxers was well received in its screening at the 1999 Seattle Film Festival.

There are no critic reviews yet for Shadow Boxers. Keep checking Rotten Tomatoes for updates!

There are no featured reviews for Shadow Boxers at this time.