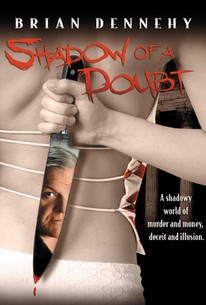 An alcoholic lawyer has to prove more than just his case in this made-for-television crime drama. Brian Dennehy stars as Charlie Sloan, a defense attorney with a drinking problem. When his old flame Robin Harwell (Bonnie Bedelia) asks him to defend her teen daughter (Fairuza Balk) who is accused of murdering her rich father, Sloan agrees. The prosecution then takes on not only the murder case, but Sloan's life as well, and the lawyer must prove himself both in court and to Robin. The movie is based on the book of the same name by William J. Coughlin and the score is by jazz artist Jane Ira Bloom.

Critic Reviews for Shadow of a Doubt

There are no critic reviews yet for Shadow of a Doubt. Keep checking Rotten Tomatoes for updates!

There are no featured reviews for Shadow of a Doubt at this time.

Shadow of a Doubt Quotes