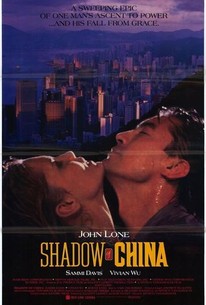 John Lone, the star of the Oscar-winning The Last Emperor (89), portrays a Chinese revolutionary in Shadow of China. Pursued by the Communists, Lone escapes to Hong Kong, where he builds up a multimillion dollar business enterprise. He hopes to use his international clout to effect changes in Mainland China, but he is defeated by revelations of his earlier underhanded business practices, and by the "dangerous" aspects of his previous political activities. Filmed on location, Shadow of China has its moments of violence, but none so extreme as to detract from the storyline. Also, John Lone proves again how his talents have often been wasted in less ambitious projects.

Critic Reviews for Shadow of China

There are no critic reviews yet for Shadow of China. Keep checking Rotten Tomatoes for updates!

There are no featured reviews for Shadow of China at this time.