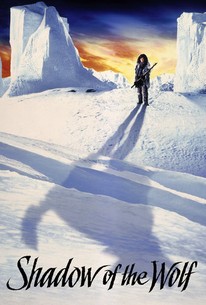 Shadow of the Wolf Photos

Based on a best-selling novel, this drama, set amongst a remote Eskimo tribe in 1935, was -- at the time it was produced -- the most expensive Canadian motion picture ever made, with a budget of $31 million. Lou Diamond Phillips stars as Agaguk, the rebellious son of tribal leader Kroomak (Toshiro Mifune). The two men disagree strongly over the growing presence of white men in the area. Agaguk wants nothing to do with the interlopers, while his father has opened a fur trade with one of them, Brown (Bernard-Pierre Donnadieu). Agaguk and Kroomak also clash over Igiyook (Jennifer Tilly), a beautiful woman whom both men want to marry, but Agaguk wins her hand. After he slays Brown in an argument, Agaguk is cursed and cast out of the tribe by his father. Agaguk takes Igiyook into the wilderness and struggles to survive there as she gives birth to a child, while Henderson (Donald Sutherland), a lawman, shows up to investigate Brown's death.

Frederic Duplessis
as Tayarak (as a newborn)

Mary Echalook
as Throat Singer A

Nellie Echalook
as Throat Singer B
View All

Critic Reviews for Shadow of the Wolf

Shot on location in the arctic north, the movie is obviously a labor of love -- which makes it all the more unfortunate that the story it tells is so simple-minded.

Audience Reviews for Shadow of the Wolf

A fantastic film! An interesting storyline that follows the lives of a hunter and his family.

Shadow of the Wolf Quotes