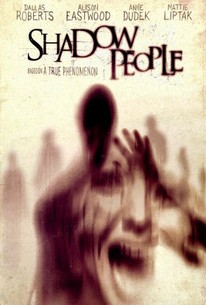 From the producer of THE DEVIL'S REJECTS and CAPOTE- Back in the 1970s several patients in an experimental sleep study reported seeing shadowy intruders. These patients - and hundreds of others - died in their sleep soon after. Doctors called the phenomenon 'Sudden Unexplained Nocturnal Death Syndrome'. They refused to discuss the shadows. Now a struggling late-night radio host (Dallas Roberts of THE GREY and "Rubicon") and a skeptical CDC investigator (Alison Eastwood) have begun researching a disturbing new outbreak of shadow sightings and sleep fatalities. Could this be a case of paranoid hallucination or are these victims literally being scared to death by actual nightmare creatures? Anne Dudek ("Covert Affairs" "House M.D.") and Mariah Bonner (THE SOCIAL NETWORK) co-star in this supernatural thriller based on true events documenting the authentic existence of SHADOW PEOPLE.

Nothing much ever happens in this ho-hum horror.

There are no featured audience reviews yet. Click the link below to see what others say about Shadow People (The Door)!