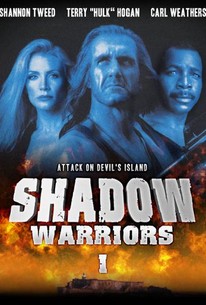 When a troupe of sexy gymnasts are kidnapped and taken to the title island by a vengeful drug cartel, it's up to commando leader Mike McBride (Hulk Hogan) to rescue them. The excitement in this fast-paced actioner begins when McBride and the Navy SEALS he commands are assigned to capture a drug lord in his country. During the operation, one of McBride's men betrays him and McBride is nearly killed. Still, he, fellow SEAL Leroy (Carl Weathers) and buxom drug-enforcement officer Ashley (Shannon Tweed) manage to complete their mission. McBride and company then set off for vengeance against the traitor, who in turn retaliates by kidnapping a team of gymnasts and taking them to his impregnable lair on a remote Caribbean island.

Edge
as US Navy Admiral

There are no critic reviews yet for Shadow Warriors: Assault on Devil's Island. Keep checking Rotten Tomatoes for updates!

There are no featured audience reviews yet. Click the link below to see what others say about Shadow Warriors: Assault on Devil's Island!