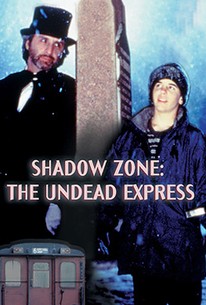 A horror semi-parody targeted at the young adult market that ravenously gobbles up horror books like R.L. Stine's Goosebumps series, this made-for-TV vampire tale stars Chauncey Leopardi as Zach, a teenage rebel with a flair for telling ghost stories, who stumbles on an underground cabal of vampires when he takes a fateful ride on a New York subway. The vampire's leader, Valentine (Ron Silver), proposes a deal to young Zach, offering him safe passage to the world above, thus enabling the trapped vampire -- who can only mingle with humanity through the willing assistance of an innocent youth -- to reach the surface as well. Our young hero balks at this idea and escapes to the surface with a wild story for his skeptical pals, who shun him until one of their number is kidnapped by the undead subway dwellers in exchange for Zach's cooperation. Though atmospherically photographed, this low-budget production is a bit too corny to provide either laughs or chills, and it suffers further from lethargic pacing.

Wes Craven
as The Counselor

Stephen Russell
as The Reaper

Bryan Renfro
as Man in Subway

There are no critic reviews yet for Shadow Zone: The Undead Express. Keep checking Rotten Tomatoes for updates!

A surprisingly good teen horror movie, with an excellent perform by Ron Silver. The story was pretty decent and it had a nice pace to this. Decent acting all the way around, even though it had a low budget feel to it.