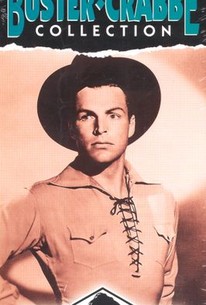 Larry "Buster" Crabbe and Al St. John -- "Our Old Pals," as they were billed -- get in trouble with a murderous Charles King in this typical "Billy Carson" Western from Poverty Row company PRC. Billy and railroad agent Dave Hanley (Karl Hackett) are discussing plans to run the new railroad through Red Rock, but their discussion is overheard by crooked hotel operator Steve Landreau (King), who unbeknownst to Billy kills Hanley for a map of the proposed line. In Red Rock, Billy discovers that Steve opportunistically has bought the local saloon, which he is planning to turn into a gambling den. Jealous of Billy's growing friendship with pretty Babs Darcy (Donna Dax), rancher Clay Kincaid (Edward Hall) becomes beholden to Steve, who wants his valuable land before news of the planned railroad arrives. Billy, who is suspicious of both Steve and Clay, confronts the latter in the saloon. In the ensuing gunfight, Steve and his men are apprehended. Clay repents, and Fuzzy (St. John) later officiates at his wedding to Babs. Busy B-Western heroine Lorraine Miller was cast as the leading lady in this film but was replaced in the last minute by Donna Dax, whom PRC borrowed from Columbia Pictures' large stable of starlets.

Critic Reviews for Shadows of Death

There are no critic reviews yet for Shadows of Death. Keep checking Rotten Tomatoes for updates!

There are no featured reviews for Shadows of Death at this time.