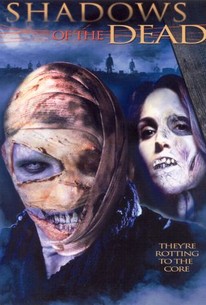 A couple struggles with both physical and emotional changes as they're infected with a strange contagion in this horror film. John (Jonathan Flanigan) and Jennifer (Beverly Hynds) are driving through the woods while on a weekend getaway when they see what appears to be a dead body by the side of the road. John stops to investigate and discovers the man isn't exactly dead when it reaches up and bites him. Before long, John's pulse rate begins to slow, the color drains from his face, and the skin begins to peel from his body, and soon the same sickness begins to overtake Jennifer as well. The couple becomes aware that they are slowly turning into zombie-like creatures with a taste for the living. Horrified by the prospect, they struggle to fight off the disease as it relentlessly spreads through their systems. Shadows of the Dead was the first feature from writer and director Carl Lindbergh.

Critic Reviews for Shadows of the Dead

There are no critic reviews yet for Shadows of the Dead. Keep checking Rotten Tomatoes for updates!

There are no featured reviews for Shadows of the Dead at this time.

Shadows of the Dead Quotes