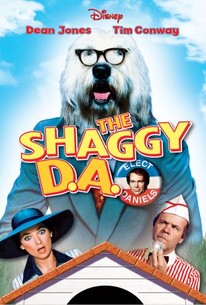 Robert Stevenson, Walt Disney Productions' house director, cobbled together his 19th family film for the organization with this slapstick sequel to the Disney comedy The Shaggy Dog (produced 17 years after the fact). Dean Jones plays Wilby Daniels, a lawyer running against the villainous John Slade (Keenan Wynn) for district attorney. His campaign is cast into doubt when he comes upon an ancient ring that transforms him into a fat sheepdog. But the campaign progresses on a level playing field when the unscrupulous Slade finds himself also turned into a canine -- a disgruntled bulldog. Another sequel, The Return of the Shaggy Dog, followed.

News & Interviews for The Shaggy D.A.

View All The Shaggy D.A. News

Critic Reviews for The Shaggy D.A.

There are also the usual scenes in which cars climb telephone poles, characters do cartwheels in midair, dogs drive ice cream wagons and Keenan Wynn blusters.

It's a goofy story, and it's far from a brilliant movie, but The Shaggy D.A. is a fun romp for a family to watch.

Audience Reviews for The Shaggy D.A.

I remember this movie being BIG with us school kids in pre-Star Wars 1976, but it wasn't anything great. I doubt kids care much about the world of public offices and just want to see the dumb doggie effects; but Dean Jones made a big ugly mutt. Now forgotten.