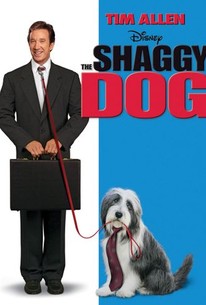 Critics Consensus: This Disney retread has neither inspiration nor originality, but may please moviegoers under the age of ten.

Critics Consensus: This Disney retread has neither inspiration nor originality, but may please moviegoers under the age of ten.

Critic Consensus: This Disney retread has neither inspiration nor originality, but may please moviegoers under the age of ten.

An unexpected transformation helps a workaholic attorney learn that there's more to life than the courtroom in this remake of the 1959 Disney canine classic of the same name. Deputy District Attorney Dave Douglas (Tim Allen) takes his job in the halls of justice very seriously -- so seriously in fact that his wife and family see considerably less of their frequently-absent husband and father than they would prefer. When a case involving an animal laboratory finds the distracted dad once again taking an extended leave of absence from his frustrated family, Douglas' luck takes a turn for the worst after he is inadvertently infected by a top-secret genetic-mutation serum that transforms the two-legged lawyer into a four-legged sheepdog. Though his current situation has its drawbacks to be sure, the fly-on-the-wall perspective afforded to Douglas in his newfound state alerts the well-intending father and husband that all is not well on the home front. Moved by the unfulfilled needs of his neglected family and determined to become a better father if he can only shed his winter coat, Douglas' unique new vantage point could offer just the motivation needed to bring the nefarious forces behind the serum to justice and win back his wife and kids once and for all. ~ Jason Buchanan, Rovi

News & Interviews for The Shaggy Dog

View All The Shaggy Dog News

Critic Reviews for The Shaggy Dog

Man becomes mutt in this inoffensive, uneven comedy that fails to make the most of its comic potential or familiar cast.

A flea-bitten farrago which bears only a fleeting resemblance to the 1959 film that inspired it.

There are precious few surprises here, but parents will find director Robbins' breezy remake a painless affair and, judging by the yowls of laughter from the peanut gallery at the screening I attended, the kids will be barking all the way home.

We've seen it a million times.

Disney's tried-and-true slapstick material (est. 1959) is here given a heinously unimaginative interpretation by five screenwriters and a director who manages to squander the gifts of an absurdly overqualified supporting cast.

The unruly pack of subplots make The Shaggy Dog much more convoluted than it needs to be.

Nothing more than a mangy mutt.

A waste of time (when will I learn?), an insult to the intelligence of a six-year-old boy, disproportionate garbage. [Full Review in Spanish]

A good-natured, sometimes silly family fun that will play especially well with the under-13 set.

...better than one might've expected, primarily due to the enthusiasm with which Allen tackles his role...

Audience Reviews for The Shaggy Dog

Robert Downey Jr. was good in this.

Not that great, a good family film at best.