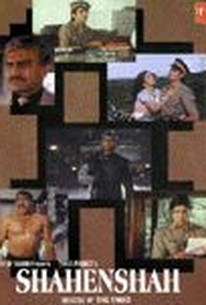 Inspector Srivastav is framed by a wily and cunning gangster, J.K., and unable to prove his innocence, hangs himself, leaving behind his wife, and son, Vijay. Years later, Vijay has grown up and has joined the police force as an Inspector. Unlike his dad, he is corrupt and does accept bribes to turn a nelson's eye to crime. The City Police are assigned the task of apprehending a customed man called "Shahenshah", who operates at night and targets, tries and kills gangsters in a "Judge and Executioner "style. No one knows the real identity of Shahenshah, as he is feared by the police department, and respected by the poor and middle-class.

There are no critic reviews yet for Shahenshah. Keep checking Rotten Tomatoes for updates!

There are no featured reviews for Shahenshah at this time.