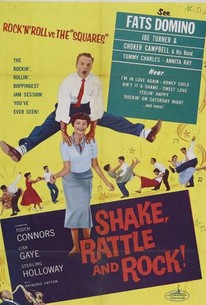 When a television star (Michael Connors) plans to open a rock & roll club for teenagers, the stuffy local parents attempt to stop him. The case is taken to court, and the kids must battle against their parents in an effort to get a legal ruling in their favor. This film features appearances by a number of musicians, including Fats Domino, Joe Turner, and Tommy Charles.

Fats Domino
as Himself

Big Joe Turner
as Himself

Tommy Charles
as Himself

Annita Ray
as Herself

Choker Campbell
as Himself

Patricia Gregory
as Pat
View All

There are no critic reviews yet for Shake, Rattle and Rock!. Keep checking Rotten Tomatoes for updates!

There are no featured reviews for Shake, Rattle and Rock! at this time.