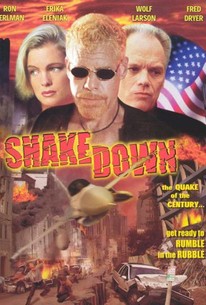 Brian Katkin, the director behind such video-store fare as If I Die Before I Wake and Hard as Nails, delivers this action thriller starring Ron Perlman and Erika Eleniak. Released straight-to-video in 2002, Shakedown centers on a terroristic religious cult, led by Perlman, with plans to infecting the world with a deadly biological weapon. After an earthquake, Perlman finds himself trapped in an office building with the weapon he covets and an undercover agent (Wolf Larson) bent on stopping him. Hunter's Fred Dryer co-stars.

Morocco Omari
as Tony B

What could have been an otherwise passable couple of hours in the hands of Joel Silver, is instead reducted to crumbs of atrocity thanks to it's unethused script, ridiculous looking CGI and terribly annoying onslaught of one-liners and black humour

There are no featured audience reviews yet. Click the link below to see what others say about Shakedown!