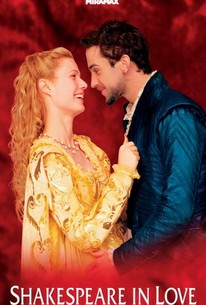 Critics Consensus: Endlessly witty, visually rapturous, and sweetly romantic, Shakespeare in Love is a delightful romantic comedy that succeeds on nearly every level.

Critics Consensus: Endlessly witty, visually rapturous, and sweetly romantic, Shakespeare in Love is a delightful romantic comedy that succeeds on nearly every level.

Critic Consensus: Endlessly witty, visually rapturous, and sweetly romantic, Shakespeare in Love is a delightful romantic comedy that succeeds on nearly every level.

William Shakespeare (Joseph Fiennes) is on a cold streak. Not only is he writing for Philip Henslowe (Geoffrey Rush), owner of "The Rose," a theatre whose doors are about to be closed by sadistic creditors, but he's got a nasty case of writer's block. Shakespeare hasn't written a hit in years. In fact, he hasn't written much of anything recently. Thus, the Bard finds himself in quite a bind when Henslowe, desperate to stave off another round of hot-coals-to-feet application, stakes The Rose's solvency on Shakespeare's new comedy, "Romeo and Ethel, the Pirate's Daughter." The problem is, "Romeo" is safely "locked away" in Shakespeare's head, which is to say that not a word of it is written. Meanwhile, the lovely Lady Viola (Gwyneth Paltrow) is an ardent theatre-goer -- scandalous for a woman of her breeding -- who especially admires Shakespeare's plays and, not incidentally, Bill himself. Alas, she's about to be sold as property into a loveless marriage by her mercenary father and shipped off to a Virginia tobacco plantation. But not before dressing up as a young man and winning the part of Romeo in the embryonic play. Shakespeare soon discovers the deception and goes along with it, using the blossoming love affair to ignite his muse. As William and Viola's romance grows in intensity and spirals towards its inevitable culmination, so, too, does the farcical comedy about Romeo and pirates transform into the timeless tragedy that is Romeo and Juliet. ~ Merle Bertrand, Rovi

Simon Callow
as Tilney, Master of the Revels

Steven Beard
as Makepeace, The Peacemaker

Patrick Barlow
as Will Kempe

Bridget McConnel
as Lady in Waiting

Georgie Glen
as Lady in Waiting

Jason Round
as Actor in Tavern

Richard Gold
as Lord in Waiting

Tim McMullan
as Frees
View All

Critic Reviews for Shakespeare in Love

Outside the romance, it's also got great depth and insight into the nature of showbusiness.

In a little more than two hours, director John Madden, screenwriters Marc Norman and Tom Stoppard and a terrific cast and crew accomplish the miraculous.

It almost defies you not to have fun.

There is plenty to be thrilled about.

Sometimes it's the small things that provide the biggest delights. That's certainly the case with Shakespeare in Love, a tongue-in-cheek romance about the greatest romance ever written.

All these funny, frenetic performances make for an enjoyable romp.

Also of significant weight is the music by Stephen Warbeck, who has crafted stirring themes that sneak into the movie at all the right spots.

A wonderful combination of the old-fashioned and the new.

....the echoes of passionate Shakespeare will linger in the memory and the most pleasant memories of the spectator. [Full review in Spanish]

Shakespeare in Love lives up to its name with its joyous sensuality.

A good cast, if you can forget for a moment the protagonist, Joseph Fiennes. [Full Review in Spanish]

Audience Reviews for Shakespeare in Love

Shakespeare in Love is a film that I really wanted to enjoy, but I simply didn't get into it. For me, it's a mediocre film, one that fails to really grab your attention and it really should have been something great. However this is a film that is killed by the hype, and watching this, I simply didn't understand its grandeur or reasons why it's superb cinema. Before I get flack for my review. I consider films like Lawrence of Arabia, Gone with the Wind, the Godfather to be great cinema. Not this. But that's my opinion. Shakespeare in Love felt like it just strived to please the board of the Academy, and it sure did, as it's your typical Oscar Bait film. I usually enjoy films such as this, but like I said, the film didn't grab my attention, I felt that there was something lacking in the film to really make it memorable. The cast did do a fine job in what they brought to the screen, but the film just tries far too hard to impress that it just ends up underwhelming. I felt that it didn't warrant an Oscar win, as there were far better films to win than this. Saving Private Ryan should have won, because it's a far superior, more emotional film, and one that is captivating from the first frame onwards. This on the other hand just feels tiresome in the long run, a film that is tedious and tries far too hard at grabbing your attention, and in doing so, you lose interest, and a film like this should have grabbed your attention effortlessly. But everything feels overdone, and it ends being a film that doesn't satisfy.

sweet and pleasant but completely unworthy of its oscar win. gwyneth is fine but again not award worthy. the divine judi dench certainly deserves awards but not for this. ben affleck is charming however in this trifle.

'Shakespeare in Love'. A genius, meta-adaptation of Shakespeare's 'Romeo and Juliet', telling the story behind the story. A magnificent screenplay about the very truth and nature of love.

I never thought it possible, but on the Gwyneth Paltrow's breasts front, I have to say: too much, too soon. I know, I know, it had to be established that this was a passionate love affair, and to the knukcle-dragging boyfriends watching this movie, there had to be a reason to keep watching, but the sex scenes in the early going actually had a negative impact. It got really boring by about the 45-minute mark, with the love affair having peaked early, leaving only the lacklustre Joseph Fiennes to invest in - very little was actually happening. Thankfully, though, the few plot pieces that were tediously laid down did knit together a great second half, one in which even Ben Affleck did his damnedest to not suck (and more or less succeeded). Gwyneth Paltrow carried the movie in a few spots, balancing her two characters very well. Best Actress-well? The Academy thought so... The story is at worst a plausible fiction, and contains many references to Shakespeare's life and work; the best and worst part of these references, however, is that they're playful, sometimes being clever and sometimes dragging the film down into camp. The film feels inauthentic, but it's quite glossy too... I'm not sure that it was better than Saving Private Ryan in 1998, but despite itself it turned out to be a rather good film.