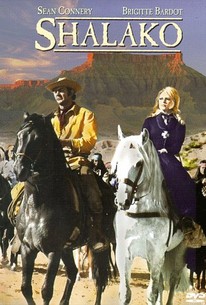 In this western adventure, Shalako (Sean Connery) leads a hunting expedition in the wilds of New Mexico. There they run across an Apache camp where the Countess Irina (Brigitte Bardot) is being held hostage. When the Indians retaliate by destroying the camp of the European aristocrats, Shalako must use his wiles to battle the Indians and the jealous members of his own hunting party. The camp is robbed by Fulton (Stephen Boyd), who runs off with the wife of Sir Dagget (Jack Hawkins). Lady Boyd (Honor Blackman) leaves her rich husband in a dramatic split decision prompted by the marital discord between her and her pompous husband. Shalako leads the survivors through dangerous mountain terrain, engaging in climactic hand-to-hand combat. ~ Dan Pavlides, Rovi

Bob Hall
as Johnson
View All

Strong action on a very wide screen from mid-front row turns out to be quite wonderful.

Edward Dmytryk's Shalako is a disappointment from this veteran action director, whose recent "Anzio" was a cut above most war epics.

At least the premise was cute.

This is one of Louis L'Amour's best novels and as always the book is so much better than the movie. While the story is fairly engaging, the action scenes are good, Sean Connery is in great form, and Brigitte Bardot is as beautiful as ever, it is filled with traditional stereotypes of "Paleface good and Redskin bad" that I did not appreciate.

A decent cast wasted in an unusual but slightly tedious western that's basically a safari movie in the desert. Dull.