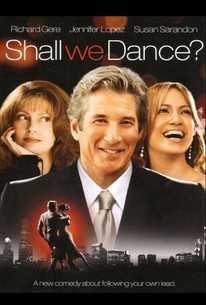 Critics Consensus: The cast is warmly appealing, but with the loss of cultural context and addition of big-name celebrities, this American version loses the nuances of the original.

Critics Consensus: The cast is warmly appealing, but with the loss of cultural context and addition of big-name celebrities, this American version loses the nuances of the original.

Critic Consensus: The cast is warmly appealing, but with the loss of cultural context and addition of big-name celebrities, this American version loses the nuances of the original.

Shall We Dance Photos

Directed by Peter Chelsom, this film is the English-language remake of Masayuki Suo's 1995 romantic comedy of the same name; the Japanese version earned a record-breaking 9.5 million dollars in United States box offices. Shall We Dance? revolves around John Clark (Richard Gere), a workaholic Chicago lawyer who, despite a respectable paycheck and loving family, is unable to shake the feeling that something in his life is missing. On a whim, John disrupts his normal evening commute to attend a dance class in hopes of meeting Paulina (Jennifer Lopez), a beautiful dance teacher he would occasionally spot gazing out of the studio windows. Though Paulina quickly lays to rest any preconceived romantic notions John may have had about her, she nonetheless forms a bond with him that goes beyond those normally held by a teacher and student. Invigorated with his new hobby, John focuses his newfound enthusiasm into training for an upcoming dance competition; however, he chooses not to let his wife (Susan Sarandon) in on his plans. Unaware that dance may be, in fact, saving her marriage, John's wife becomes suspicious of all the time he spends away from home and hires a private investigator to find out whether or not her husband is having an affair. Ultimately, John is forced to examine how his old dreams fit in to his new life. ~ Tracie Cooper, Rovi

Sharon Bajer
as Woman at Party

Diana Salvatore
as Tina
View All

News & Interviews for Shall We Dance

View All Shall We Dance News

Critic Reviews for Shall We Dance

Cute romance that is marred by homophobia.

It's rather cute, but only the truly girly will fall for the decidedly Officer And A Gentlemanly denouement that injects a belated sexy note.

Offers attractive, inoffensive characters and a smattering of broad laughs, but it fails to use its potential to explore weightier themes such as John's mid-life crisis.

Shall We Dance? stumbles into a tight corner between comedy and romance, failing to satisfy on either count.

Now, twenty-six years after his theatrical debut, Gere gives what just might be his most bewitching performance to date, enlivening a picture to heights it would not have achieved without him.

Under the clunky direction of Peter Chelsom, while forced to mouth inane dialogue by Audrey Wells ... a swell bunch of troupers get mangled in a monsoon of clichés.

A sunny, life-affirming celebration of simply hoofing it, any old how.

British director Peter Chelsom proves to be an inspired choice. Dressing the film with an eye-pleasing kitsch retro look and sprinkling the proceedings with moments of eccentric humor, he recalls his fine earlier films.

"Shall We Dance?'' celebrates marriage, self-renewal, the benefits of acting on impulse and the courage to dance to your own mambo beat. Audiences susceptible to its charms will be dancing down the aisles.

But there is nothing even deliciously bad or even fun bad in Shall We Dance, you won't find a moment of emotional truth, anywhere, nowhere, not in Richard Gere's twinkly demeanor, or in Susan Sarandon's googly eyeballs.

Touches to make 'hip' what should be an unabashedly square story--such as the casting of Nick Cannon in a supporting role and an out-of-nowhere cameo by Ja Rule--more jar than gel.

This excellent and acclaimed cast is shoved into a film whose screenplay should have alerted them that it's not ready to go before the cameras.

Audience Reviews for Shall We Dance

Richard Gere ruined this film. That is all.

This movie made me want to attend ballroom dancing lessons! lol! Anywhoo, I think Gere looked sweet, hes always charming anyway, but the contrast really showed when he was dancing with Lopez, I thought she was too much of an intense dancer to be partnered with Gere. Mwahaha, all guys should learn how to dance, its so cute hahaha!

Any good in this film is pretty much drowned out by the predictability factor. It's cinematic fluff that hits all the right buttons to impress it's target audience which it does very well. Satisfactory acting, a few laughs and ridiculous moments of going "AAAWWW" mean you know within 4 minutes if this is a film for you.

Shall We Dance Quotes