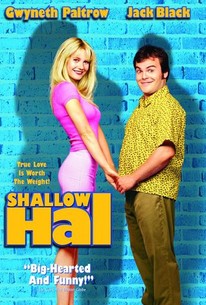 Jack Black continues his march to stardom with this typical Farrelly brothers blend of broad comedy and a heartfelt message. Black is Hal Larsen, a shallow man rapidly approaching middle age whose superficiality can be attributed to his father's deathbed admonition to only date young, beautiful women. Hal and his best friend, Mauricio (Jason Alexander), have taken the advice to heart, but Hal finds all of his physically impressive girlfriends consistently lacking in other qualities that would make them ideal mates. When he bumps into self-help guru Tony Robbins (playing himself), the motivational entrepreneur is intrigued by Hal's predicament and hypnotizes him so that he'll only see the inner beauty of women. Hal is quickly smitten with Rosemary Shanahan (Gwyneth Paltrow), a blonde Peace Corps volunteer who's tenderhearted, funny, and intelligent. She is also gorgeous and meets Hal's basic criteria of outer perfection, but what he doesn't realize is that Robbins' spell is working and he cannot see that Rosemary actually weights 300 pounds. When Mauricio is finally able to snap Hal out of his charmed state, Hal's in love with the inwardly perfect woman and must overcome his obsession with beauty. The script for Shallow Hal (2001) was developed when Peter Farrelly enjoyed the humorous letters written to a mutual friend by Sean Moynihan, a computer software executive who followed the filmmaker's advice to take up screenwriting. ~ Karl Williams, Rovi

Brian Mone
as Board Member No. 1

Bob Mone
as Board Member No. 2

Gigi Moran
as Nurse No. 1

Caryl West
as Nurse No. 2

Brianna Gardner
as Sick Kid No. 1

Mariann Neary
as Information Attendant No. 1

Christal Handy
as Information Attendant No. 2

Will Coogan
as Punk No. 1

Ashley B. Howard
as Sorority Girl

Bonnie Aarons
as Spastic Friend No. 1

Lisa Brounstein
as Spastic Friend No. 2

Herb Flynn
as Homeless Man No. 1

Michael Corrente
as Homeless Man No. 2

Ron Darling
as Other Li'iBoy

Kelly McRorie
as Bar Girl No. 2

John Dennis
as Guy in Bar

Tom Hohman
as Frat Boy No. 1

James Badstibner
as Frat Boy No. 2

Jesse Peter
as Sick Kid No. 1

Anna Byers
as Sick Kid No. 2

Robby Johns
as Kid in Tree

A movie that meanders from one sight gag to the next, many of which you've already seen in the commercials.

With the relatively untested Black coming on awfully strong, the lack of directorial finesse lets the enterprise down, creating some clunky scenes and dead air where laughs might have been expected.

The film is not as funny as their best, but fascinates in the discomforting way it foregrounds the brothers' normally buried, facile moral dialectic.

The Farrelly brothers are fresh out of ideas with this dull effort, a kind of Farrelly Lite. They have replaced intentional bad taste with the unintentional sort.

Hilarious in parts, sickeningly sentimental in others, Shallow Hal has the Farrellys trying to expand their range, with only mildly successful results.

The pervasive, uncomfortable feeling from Hal's confusion distracts from the commendable nature of the themes and the effectiveness of the humor.

Obviously no one bothered to tell Bobby and Peter Farrelly to stick to what they do best in film making - insanity, stupidity and raunchy bathroom jokes.

The Farrellys take an artistic step backward with this soft, disappointingly sentimental comedy about the true nature of beauty; they seem to have forgotten their roots in the outrageous and gross-out.

A sweet romantic comedy that rises above its moments of lowest-common-denominator humor ... to offer a positive message about love and perception.

[An] insulting new comedy from Bobby and Peter Farrelly.

There's just about enough charm and laughs here to keep Farrelly fans happy. Even the fat ones.

This is one of those movies that I always watch if I happen to flip to it half an hour in on TBS or FX. Yes, there are plenty of fat jokes, but Gwyneth is the most down-to-earth I've ever seen her, and Jack Black gets some great dawning moments as well, like with Cadence in the burn ward.

A message comedy? Perhaps. The Farrelly Brothers seem to be answering their critics who often see them as sophomoric (if that) with this bon bon (forgive me) that reminds that beauty is in the eye of the beholder. The comedy: one fat joke after another. The message: like most messages, boring as hell (who do you think you are, tryin' ta larn me!). The final analysis: viewers choice.

Quite a generic Hollywood chic flick.

I simply don't care enough to lay out a full review, so I'll just say that this film was decently funny despite a few lazy performances. The writing was horrible, the story was horrible, yet I still enjoyed it quite a bit.