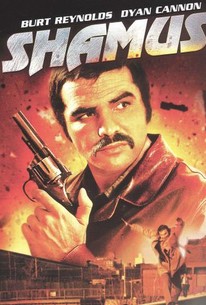 This detective-themed action-adventure film spoofs The Big Sleep, which was based on the novel by Raymond Chandler. Burt Reynolds plays McCoy, a hard-nosed private detective. The story has more tangles than a bowl of spaghetti, but it begins when McCoy is called to the house of Hume (Ron Weyand), an eccentric diamond dealer, and is given the task of recovering some stolen gems. McCoy is beaten by a gang of thugs to warn him off the job, and this lets him know that he's onto something really big. By the end of the film, McCoy will have hooked up with a gorgeous blonde (Dyan Cannon), driven a tank through a warehouse wall, and delivered numerous crooks to the police.

Kevin Conway
as The Kid

The movie's structure is right out of the Raymond Chandler bag.

This tiresome private eye crime drama is what The Big Sleep would look like if it was dreck.

A must-see for the 70s icons alone -- Burt Reynolds, Dyan Cannon, and Morris the Cat!

When it's over and you think about it, you realize that from about mid-point on nothing has held together.

By the time the mysteries are solved, you won't only be confused; you simply won't care anymore.

Why has this film faded into semi obscurity? It's great. First of all, Burt Reynolds is one of the best action heroes ever. Forget your physical specimens of the 80s to present, Burty has the build of a normal dude, he gets tired, hung over, physically overtaken, but he's clever as hell. It's seeing him struggle through action sequences that makes them so exciting in this flick. Not to mention he's his smarmy self, and bit of a womanizer at that, but I mean, it was the 70s. Think of him as a bubbling Shaft, but less so than Elliott Gould's Marlowe in the Long Goodbye. Added to all this you have an intriguing story, and some strange, yet amusing characters and situations. Not to forget a great and appropriate score from Jerry Goldsmith. Almost needless to say: this one stands out.