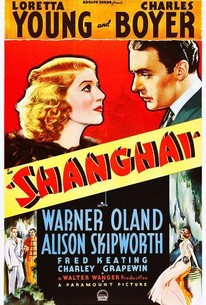 The stigma of miscegenation (horrors!) is at the base of this very dated romantic melodrama. Charles Boyer stars as Dmitri Koslov, an enterprising Eurasian who rises from rickshaw driver to powerful industrialist, all the while concealing his mixed parentage. Koslov falls in love with beautiful American Barbara Howard (Loretta Young), but dares not propose marriage because he is half-Chinese. Even so, Barbara insists upon trailing after the elusive Koslov into the mountainous regions of China, symbolically shedding all her valued possessions to finance her odyssey. But East is East and West is West, thus the "forbidden" alliance between hero and heroine must end on an unhappy note. Swedish-born Warner Oland once again convincingly impersonates an Asian as a Chinese ambassador.

There are no critic reviews yet for Shanghai. Keep checking Rotten Tomatoes for updates!

There are no featured reviews for Shanghai at this time.