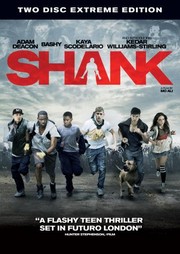 Super Reviewer
Gimly M
September 14, 2016
There's not a lot of love out there for Shank, but I for one quite enjoyed it. I understand it won't be for everyone, and I do come into it with a bit of a bias, but the only way you'll know for sure if you can appreciate Shank (and decipher its various UK accents) is to watch it for yourself.

Baurushan J
September 8, 2013
Directed by the unknown Mo Ali, the story tells us about knife-crime because guns have been superseded. The Paper Chazers gang trade scavenged food for money but when Junior witnesses his brother's murder, he must decide whether to stick to the gang's moral code or get his own personal revenge. Showing us the present-day social issues, the murky city streets and the imaginative action, Shank gets a 6/10 because while the movie is good it's so bland and forgettable.

Jeanie M
April 30, 2013
i really want to see this. i seen trailers and its got that chick from Skins in it and some of the dudes from Kidulthood. cant wait

April 4, 2013
more chav crap piling up on the latest dvds section, it's awful.

Paul D
½ March 6, 2013
Poor urban dystopia movie. The story isn't coherent and the subcultural themes too irrelevant to the audience if poorly conveyed, and they are. The future setting isn't shot too convincingly with reminders of modern day life happening in some backgrounds.

jodie w
½ February 11, 2013
A bit far fetched and the bit where God in to computer game mode is whack bit disappointed actually because I really wanted to watch this . But it was a let down

Super Reviewer
♥˩ƳИИ &
December 8, 2012
"Everything about this film is mediocre. The acting, script, and directing. I could barely understand what some of the dialogue was. I even had the captions on and it said inaudible. So it wasn't just me. That's about all I gotta say about this flick."

Richard P
September 27, 2012
The idea is great, but the execution was mediocre.

-Will do crime for food-

I could have done without the dream and video game sequences and shit talking got old very quikly. The hip hop/tech soundtrack was bad ass. The paper chasin' moral of the story is for shite.

-No more eating for you now-

Darren C
½ May 24, 2012
Have you ever heard of the phrase "All the gear, no idea"? This film is the definition of what it means. The idea of Shank is a great one and it could have been a brilliant gritty movie but it's executed very poorly. While the movie questions you to ask yourself "what if this decision was made and this happened" and tries to send strong messages about anti-violence and such, it fails to do so and succeeds in doing the opposite, just like 1 Day. So the movie is set in 2015 and the gangs have taken over, the story revolves around Junior who witnesses his brother Rager being murdered by Tugz and so he goes out on a vengeance mission to find Tugz and kill him. Shank had a brilliant idea and it was interesting that it was a British gang culture movie set in the near future but everything about it was just terrible, from the acting to the directing. Let's start with the plot, it's very thin and has been done loads of times before and done much better, you only have to watch Kidulthood or Adulthood as evidence to this. Shank starts off okay with Junior narrating about how tough life is on the streets of 2015 and how he's part of a non-violent gang known as The Paper Chaserz and how his brother, Rager, and his other 'brothers' don't condone the 'postcode war'. That is until Tugz, the leader of a rival gang, stabs Rager, the leader of The Paper Chaserz, and Junior wants to kill Tugz. That was when the movie started to go downhill. It just felt like an excuse to make a movie involving teen gang violence, stealing, drugs and sex. This movie is basically the Daily Mail reader's worst nightmare.

The characters in Shank were just uninteresting, everything about them was unlikeable. Yes they may have did one or two things that the characters did that made you laugh a little but other than that, you weren't bothered about any of them and they remain unlikeable throughout the movie. Also, it seems that they can't make up their minds whether they want to be violent or not. One minute they're saying they don't want to stand and fight and the next, they're threatening other gangs and dog fighting. While we're on the subject about the characters in this movie, the names given to them are terrible and sound a lot like nicknames a ten-year-old would give to look tough. Junior is alright but Rager? Kickz? Tugz? Craze? Whisper? They sound a little bit childish. Also, the gangs were named a bit ridiculous as well: Slaughter Gurlz, Paper Chaserz...what's wrong with the letter S? Is it against the law to use S on the end of names? Personally, changing Kickz to Kicks looks better to me. Another thing that annoyed me about Shank was when Junior introduces characters, he'd always say they're tough, mean or psychopaths. This is supposed to be Broken Britain when gangs are extremely violent and killing people, you'd think you get the picture without him telling us they're mean.

The cast of Shank aren't the best actors in the world and they don't do the best job with their characters. Adam Deacon and Michael Socha do a couple of entertaining scenes as their characters Kickz and Craze but other than that, the rest of the cast doesn't bring much to the screens. The acting isn't terrible but it is quite bad, especially Kaya Scodelario which came as a surprise considering she's a good actress in Skins. The direction wasn't really great either, the whole movie just felt like a feature-length music video (well, it is directed by music video director Mo Ali, what do you expect?). Shank should have been serious, what with the story and the messages but there were a few things in the movie that took the seriousness away. This is because there were some scenes including a dog fight with computer-game beat-em-up energy bars (you don't see the dogs fight, just spectators screaming at the camera) and a confusing Grand Theft Auto-like scene when Junior steals a BMX. Another thing Shank didn't have was a decent script, the lines were very lazy and didn't aspire or mean anything bar a couple of scenes. Shank is a good idea and, in the hands of somebody like Noel Clarke who had written Kidulthood and Adulthood, could have been a great movie but in the end, it was dull, boring in most parts and offers nothing new. I really wanted to like this movie because I thought the idea was brilliant but unfortunately, I was very disappointed with this monstrous mess. Teenagers will probably love this movie but I doubt adults will like it. If you want to watch a better movie than this, watch Crank, The Warriors and Adulthood since it's those movies combined together. I pray British movies do better than this attempt from now on!

Jeanie M
April 24, 2012
i really want to see this. i seen trailers and its got that chick from Skins in it and some of the dudes from Kidulthood. cant wait

James M
April 1, 2012
Warning - watch this film and be prepared for an onslaught of drum and bass that will likely give you a headache you cant shift for days! Its a modern day version of the Warriors, though focusing on a message of revenge more than of them getting home and personally, I still preferred it to the warriors, but only margainly. It missed the boat with its ideas so many times, tonally all over the place and with ridiculous mid story (I want to call them) dance-offs? Still some good ideas, the setting and the banter were quite realistic for modern audiences, as long as you can understand modern street talk, fam. Also thought it could have turned up the violence a bit (and turned down the music!). I liked the animated fight sequence but the computer generated one was totally out of place and badly done. Id find it hard to recommend to anyone unfortunately, it has its merits but too many negatives to make it worthwhile.

Gary M
½ January 13, 2012
I thought the movie was good. Shows you how gang violence can get out of control.

Jacob F
December 26, 2011
Not the worst film in the world, but close to it.... fantastic soundtrack but it was completely disappointing in all respects.
Page 1 of 8