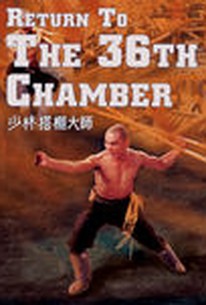 Lau Kar-leung follows up on his 1978 classic with this comic kung-fu flick which is more of a parody than a sequel to the original. Two-bit con artist Chi (Gordon Lau Kar-fai) convinces a group of desperate workers at a dye mill who have been denied their pay by their evil Manchu bosses that he is none other than the legendary martial arts master San Te. Chi tries to hide his utter lack of kung-fu ability until he gets humiliated by crack kung-fu fighter Boss Wang (Johnny Wang Lung-wei). Chi scurries to the Shaolin temple hoping to develop some real ability. Initially he is turned away by the monks until San Te himself takes pity on the guy. There Chi learns the skills he needs to take out Wang and thwart the baddies. ~ Jonathan Crow, Rovi

There are no critic reviews yet for Shao Lin da peng da shi (Master Killer II)(Return to the 36th Chamber). Keep checking Rotten Tomatoes for updates!

A sort of spirital sequel to "36th Chamber", and i'll have to say that with better rythim and more fluid. The approach is more on the light/comic side, but the fights kick equal ass.

This film stares Gordon Liu again, but he doesn't play the same character, and it takes place after the 36th chamber is already established. What makes this flick stand out though it that it adds comedy, and it kinda of like a rebutal (sp?) or like the flip-side of the first one. I don't want to give it away, so I'll stop there, but, even though the first holds it's own, it may be said that the final pay-off in this one is a lot more satisfying. It's more drawn out, and because, partly, of the comedy the stunts and fantastic.