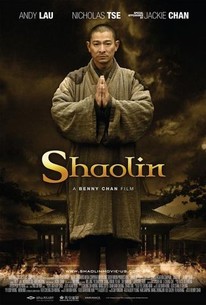 As feuding warlords fight to expand their power, the noble monks of the Shaolin Temple clean up the mess left behind, tending to the injured while trying their best to protect the poor and weak. General Hou (Andy Lau) has caused much of this mess with his violent and ruthless tactics that rarely discriminate between soldiers and civilians. When Hou is betrayed by fellow general Cao Man (Nicholas Tse), he is forced into hiding, and takes refuge with the monks (including Jackie Chan) at their hidden mountain temple. As the days pass, he finds himself more and more at ease as he learns the ways of peace, and begins to release his hatred through Martial Zen. But Cao is not far behind, and war soon reaches the temple, where the monks are ready to fight back with their unstoppable Shaolin Kung Fu. -- (C) Reliance

Hai Yu
as The Abbot

Frequently gripping and featuring a surprisingly spry supporting turn by Jackie Chan, it's a sturdy if unremarkable effort.

An ambitious, almost epic drama that devotes as much time to introspection as it does to combat.

This rousing Shaolin is notable for the compassionate Buddhist philosophy that underpins what otherwise might have been just another Hong Kong period piece.

"Shaolin" fits in the more somber kung-fu tradition. But it also finds room for the genre's comic strain.

The epic feel to this Hong Kong action-drama helps balance a lack of hand-to-hand combat scenes.

More action, less talk should be the order of the day, but it isn't.

One of those films that impresses you, even though it fails to set itself apart from other films in the genre.

Ambitiously staged set pieces fall victim to portentous technique, creating an ultimately irreconcilable chasm between how much one wants to like this movie and how much they actually do.

Jackie Chan brings some warm energy to his supporting role -- a rarity for this big star -- and turns in a delightfully self-effacing performance.

Shaolin is simultaneously regal and stilted, stirring and sluggish.

Large-scale melodrama is short on action and long on histrionics.

This is not a subtle film, and certainly not a great one, but it's made with bubbling brio and it's spectacular to look at. It's action filmmaking of the highest order.

Fantasy martial arts tale built on the simple story of a man who makes a terrible mistake, hurting everyone who loved him, and spends the rest of his life clearing his mind, rebuilding the way he sees the world and atoning for his sins by protecting the weak. A simple, solid story that was beautifully acted and really moved me. Everyone finds their place. And of course I've been an Andy Lau fan my whole life because people think my dad looks like him. Or should I say, he looks like my dad.

Really good film. Lots of great choreography. Jackie Chan shows up in this, and he adds alot of humor. The only thing that took away from the movie was the foreign troops that show up to cause conflict...the lead soldier was a horrible actor. But that is such a small section, and it doesn't take away from this film. Good all around movie.

the film had some excellent moments. the story was predictable but still engaging, some of the action was solid, and the film looked great. however there was so much about this film that disappointed. some of the action was silly, and the end of the film fell flat at so many moments. i was looking forward to this film with much anticipation, but in the end, it was just a tad above average.

A decent effort, no big surprises here, but the whole thing is done with enough conviction and skill, just a bit too predictable and one dimensional. Bad guys learn their lessons, evil foreigners want to steal chinese treasures, and so on. Not bad if you want a kung fu fix, but there's no hurry to watch this one.