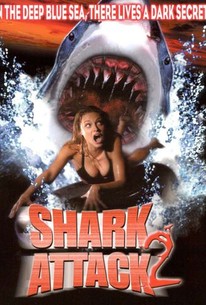 Danger stalks the beautiful beaches of Hawaii in this action-packed drama. Dr. Nick West (Thorsten Kaye) is a marine biologist hired to deal with the results of an experiment in genetics -- a mutated breed of great white sharks with an especially fearsome disposition. West soon discovers some of the sharks have gotten loose while being transported to a aquarium and are helping themselves to the windsurfers along a once-quiet Hawaiian shoreline. West teams up with Roy Bishop (Daniel Alexander), a veteran shark fisherman from Australia, to capture the deadly creatures before they can claim any more victims; assisting them is Samatha Sharp (Nikita Ager), a beautiful woman whose sister was killed when one of the mutant sharks attacked them while swimming. This sequel to Shark Attack received its United States debut on the USA cable network.

There are no critic reviews yet for Shark Attack 2. Keep checking Rotten Tomatoes for updates!

It gets points for the link from the first film, and also for having the nerve to use the same discovery channel footage again too. The characters were good although still fit into the expected stereotypes.