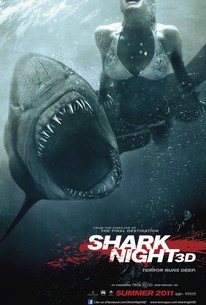 Critics Consensus: A joyless excursion into the water that doesn't even produce good gore or nudity thanks to the neutered PG-13 rating.

Critics Consensus: A joyless excursion into the water that doesn't even produce good gore or nudity thanks to the neutered PG-13 rating.

Critic Consensus: A joyless excursion into the water that doesn't even produce good gore or nudity thanks to the neutered PG-13 rating.

Arriving by boat at her family's Louisiana lake island cabin, Sara (Sara Paxton) and her friends quickly strip down to their swimsuits for a weekend of fun in the sun. But when star football player Malik (Sinqua Walls) stumbles from the salt-water lake with his arm torn off, the party mood quickly evaporates. Assuming the injury was caused by a freak wake-boarding accident, the group realizes they have to get Malik to a hospital on the other side of the lake, and fast. But as they set out in a tiny speedboat, the college friends discover the lake has been stocked with hundreds of massive, flesh-eating sharks! As they face one grisly death after another, Sara and the others struggle desperately to fend off the sharks, get help and stay alive long enough to reach the safety of dry land. -- (C) Relativity Media

Chris Zylka
as Blake
View All

Not content to restrict itself to an exercise in "When Nature Attacks," the filmmakers take a hard, ugly turn into torture-porn territory.

Shark Night, handled with impersonality by Snakes on a Plane pilot David R. Ellis, aspires to nothing more or less than carrying along an audience through a string of unremarkable kills, often involving high-jumping fish.

A second round is out of the question. Unless, of course, they called it "Gladys Knight 3D.'' Then all is forgiven.

The sharks are rubber and the performances are wooden and that's just about all you need to know.

Snakes On A Plane at least displayed a commitment to its magnificent ridiculousness. By comparison, Shark Night 3D just gives dumb movies a bad name.

The result is a movie that isn't crummy, exactly, just blah: when the freakiest teeth on screen belong not to one of Walt Conti's animatronically realized sharks but to a good-ol'-boy called Red, you know you have a problem.

Too silly to be seen as any kind of serious critique of American culture and too caught up in its own thematic self-reflexivity to be a completely satisfying piece of junk horror.

Ellis does a good job with timing and cuts together what looks like footage of real sharks with his actors in a way that makes us take notice without having too many shots where what we may assume is an animatronic shark is in frame with a performer.

No matter how hastily pieced together the film feels, you can't help but admire Ellis' tenacity... It's just a shame it's not any good.

When I wasn't laughing at the scenes of sharks leaping out of the water to attack their prey (in trees! on jetskis!) I was questioning the happy coincidence of a runaway motorboat heading directly towards a pier littered with flammable gas tanks.

An atrocious waste of time, this "Night" is one you'll quickly forget.

Shark Night 3D is a horrible film that is one of the most unoriginal pieces of crap I've seen in quite some time. David R. Ellis who made a previous nature gone wild theme horror film with Snakes on a Plane misses the mark entirely with this one. The films plot is nothing new, in fact it's predictable. We all know what happens with this one. The story is bad, the film rides on all the usual clichés, not to mention that the cast is awful and can't act. Ellis made a good film with Snakes on a Plane; it was a fine tribute to B movie comedy horror in my book. However with this one, it simply doesn't deliver the goods. After all those dreadful; Jaws sequels, you'd think they would stop with making bad shark films. Well, I guess they didn't learn their lesson. This film is just poorly made, with no heart and it's not even one of those films that are worth watching for a mindless night of dumb fun. As a horror film, it fails, this is stupid, pointless and overall a train wreck of a film. This so poorly crafted, so lazily made that you don't care for any character, in fact the only thing you care about is the end credits because at least now the horror of sitting through this film is over. This film never should have been made, and is not a good nature gone wild film. Watch the original Jaws for real shark terror and Joe Dante's Piranha for real fun. This simply doesn't deliver. Well it delivers on the mediocrity and it's something it has plenty of. This film might have succeeded if more care went into writing a consistent script, which is something that is clearly absent from this film. This is a film that is not worth your time, and there are far better films in the genre to watch. One of David R. Ellis' worst films, Shark Night is a cliché fest from start to finish simply designed to make a quick buck.

Hmm. Sometimes you know a movie is going to be bad before you even watch it. This is especially true in the Horror genre. Even though the movie is crap, sometimes a few brutal kills and some good laughs will at least, make things entertaining. Then there's dog shit like "Shark Night". There is no redeemable quality to "Shark Night" at all. While watching the atrocity, I was constantly reminded that I was wasting my time. The movie was castrated from the get go. The asinine PG-13 rating extracted all of the adult content necessary to make a movie like this successful. The story is, of course. ludicrous and the effects are embarrassing. 3-D movies from the 80's would point and laugh relentlessly at what is offered here. Which is really insulting, considering they smear '3D' in the title. You might want to avoid "Shark Night".

Blake: What are all these sharks doing here?  "Terror runs deep." Shark Night wants to be a movie like Piranha. It wants to be a fun, exciting, and humorous blood feast, but it makes a huge mistake in going PG-13. Movies like this have to be rated R. Piranha was a success because it had tons of gore and tons of boobs. That's what the genre is made of. This went light on everything. The gore was lackluster and the boobs weren't there at all. So now in order to be a decent movie it has to actually be inventive and original in a way that this genre just can't be anymore; and it wasn't. The movie was stupid in ways you'd expect and in other ways that are surprising. It isn't humorous, you'll laugh at it, not with it. All in all, it is one of the worst movies you'll see in the killer fish genre.  Obviously movies like this aren't trying to be the next Jaws because it just isn't possible. They need to be fun in different ways in order to succeed and Shark Night just wasn't able to do that. It was lifeless and at times just plain boring. The kills were terrible and the sharks looked just as bad. The filmmakers also went to great lengths to have stuff jump at you because everything has to be in 3D. There was a lot of fast motion scenes. We can see what they were going for; a fast paced, blood soaked extravaganza. Too bad what we were given was 80 minutes of boredom and cliches.  Killer fish movies need to look at Piranha and see what it did. The makers of that knew they weren't making a great movie, but they also knew how to make it appeal to fans of the genre. Here they lost sight of that and sinfully thought they were doing something cool. Were they ever wrong.