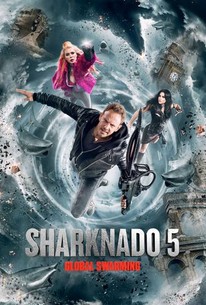 The pop culture phenomenon SHARKNADO blows into town this summer... and this time, the shark-infested storms pick up wind as the world braces for the inevitable - a global shark takeover. Will our chainsaw-wielding hero Fin Shepard (Ian Ziering) and partner in crime April Wexler (Tara Reid) save the world from this jaw snapping-nado...again?

Even a satire needs some sort of connective tissue, but there's no real narrative spine here, just soft cartilage.

Nothing about Sharknado 5 is worth recommending even if you consider it to be an American summertime tradition, as so many people do.

Somehow, Sharknado 5: Global Swarming pulls the franchise back from the brink and returns it to what it's supposed to be: fun to watch.

The basic premise has remained resolutely the same: scenes of C-grade actors getting chomped to bits by D-grade CGI sharks mixed together with enough jokey references to other, generally better movies to allow film buffs to distract themselves.

[Ziering] may be wise-cracking his way through this stuff with a self-aware smirk, but look deep into his eyes and you'll see something else staring back this movie can only dream about: blind terror.

Yet another horrible sequel in tired, violent sci-fi series.

I'll say this much about sometimes-monotonous Sharknado 5: Global Swarming: it was a slight improvement on last year's completely monotonous The 4th Awakens.

Simply put, this series has run its course and is currently beating a dead shark.

Sharknado is all about tweets and, as far as social media attention goes, fear of missing out. That turns the TV movie into a rare social media supernova that burns brightly for brief moment before the inevitable darkness of viewing regret sets in.

Franchise Fred approves Sharknado 5: Global Swarming. Theatrical movies should have this much fun, and take the absurd this seriously.

There's just no need for this film to be made, The series has gone from so bad it's fun to it's so bad I'm searching the bathroom draw for razor blades, Pure garbage, Not fun, Terrible effects, Stupid story, Horrible acting, Worst of all it's left it open for a 6th and like a complete idiot I'll watch it, Please kill me now!

It's another Sharknado. If you've watched the series this far, you know exactly what to expect.