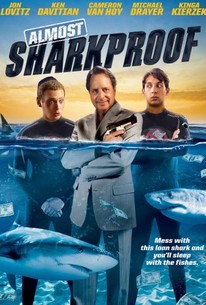 Two down-on-their-luck losers incur the wrath of a ruthless L.A. loan shark in this run-and-gun buddy comedy. Vince (Cameron Van Hoy) and Freddy (Michael Drayer) are penniless and living in a tent when they dream up an invention that's sure to make them rich - shark proof wetsuits. In a bid to finance their ambitious business venture, the duo ventures to an L.A. club owned by Max (Jon Lovitz), who also operates as a shady moneylender. Once at the club, however, Vince and Freddy fall hard for the beautiful Isabella (Kinga Kierzek), who performs a knife-throwing act with her drunken partner Yuri (Ken Davitian). Danger arises, however, when Isabella decides to run away with her two young admirers, and the vengeful Max tasks his henchmen with retrieving her by any means necessary.

There are no critic reviews yet for Sharkproof. Keep checking Rotten Tomatoes for updates!

There are no featured reviews for Sharkproof at this time.