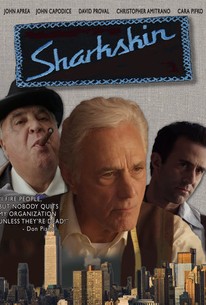 "Sharkskin" is the Post World War II story of Manhattan born Mike Esposito, a practiced tailor of custom men's clothing a man of dignity and honor, whose developing involvements with the Italian mob wraps him up in a world of moral dilemma and clashing values. When Mike's dream of making a suit for the local mafia head, Don Piano, becomes a reality, he unavoidably begins to face the criminal world and its stark contrast with his highly held principles. The pay is lucrative, the prestige grand, but when Mike's son, Sammy, unexpectedly becomes a student of and a participant in the mob's operations, Mike begins to question the effects on his family as a consequence of his accepting the job.

There are no critic reviews yet for Sharkskin. Keep checking Rotten Tomatoes for updates!

There are no featured audience reviews yet. Click the link below to see what others say about Sharkskin!