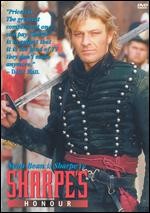 Sam P
½ April 12, 2012
Sharpeâ(TM)s Honour begins with Sharpe still mourning the loss of his wife Teresa in the previous film, a nice nod to her and a good continuity. Pierre Ducos, the successive antagonist to Hakeswill, sets up for Sharpe to be killed using a double agent, the la Marquesa. Sharpeâ(TM)s hanging is faked and, with the help of Sargeant Harper, searches for the Marquesa.

What was interesting was how the Rifles came into it. Harper had become Sharpeâ(TM)s confidante and went with him, leaving his pregnant partner Ramona at home. This allowed the 4 members of the Chosen Men to take centre stage. The best shooter, and eldest Rifle, Hagman was in charge of delivering the baby, with the intellectual Perkins offering suggestions, and the young Perkins and laddish Cooper stayed at their side. It really helped develop the idea that they were all good friends and equels, Sharpe and his 5 Chosen Men.

Pierre Ducos makes an interesting bad guy, just as sly as Hakeswill in a way, but a French enemy with an army behind him, and Napoleonâ(TM)s ear next to him, as opposed to the singular Hakeswill, this allows the idea of a proper enemy, and Ducos was very good.

Frank M
February 5, 2011
This has a lot of action, excitement, and a great plot. For a made for tv movie about war, it is powerful enough to be as good as high budget war films like The Patriot and The Last Samurai.

Jon M
½ May 10, 2010
Ah, how I miss the Borg Queen, er, I mean Alice Krige, who guest starred as these story's undercover woman of the Napoleonic Wars. I preferred the subplots to the main plot, which proved weak and only partly satisfying.