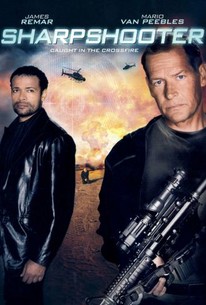 James Remar and Melvin Van Peebles headline this relentlessly tense tale of a special ops sniper who reluctantly accepts one final mission before disappearing into retirement. Dillon (Remar) is a special ops sharpshooter extraordinaire - the kind of triggerman who could take out a Tic Tac at twenty yards without so much as using his scope. But now that Dillon has experienced his fair share of the war game, he's about to hang up his rifle for good. Just as he's preparing to disappear into obscurity, however, Dillon learns that some very bad people are attempting to obtain some very volatile nuclear materials. Suddenly, an ambitious terrorist plot goes unexpectedly awry, and the man who was supposed to stop it is now at the center of a deadly conspiracy. Will Dillon be able to unravel the explosive mystery that could bring about his death, or is he playing right into the hands of the powers that be.

Jasmine Bejar
as Mourner at Mausoleum

Chris Muto
as Henchman
View All

There are no critic reviews yet for Sharpshooter. Keep checking Rotten Tomatoes for updates!

Made for TV obvious cash-in on Wahlberg's Shooter. Surprisingly this is just as good, if not better. It keeps things simple and punchy, with obvious cliches and a lean running time. It all has a very 80's/90's feel and the performances are good enough to create believability. Only Remar's narration is a flat distraction. The action scenes aren't exactly super mega exciting, but they serve their purpose of advancing the plot. An acceptable waste of time.