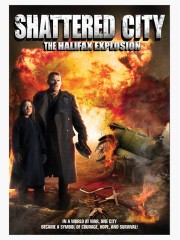 Mike S
½ November 29, 2016
The Halifax explosion of 1917 was the largest man-made blast in history up until that time. Not until the atomic bombs of World War II would humans create more devastating explosions. There is definitely a story worth telling there, but surely we can do better than this ambitious yet flawed two-part TV movie.

I see a strong narrative resemblance between Shattered City and Titanic, which came out about five years earlier. This movie gives us everyday protagonists to care about in the lead-up to and during the aftermath of the explosion. But the acting is so laboured and wooden, the dialogue so spiritless, that it's very difficult to muster up any empathy for these characters. Some of the visuals were very reminiscent of Titanic as well, particularly underwater shots of ships' propellers and other shots of engine rooms and steam valves.

There are multiple subplots, including a budding romance, a battle-fatigued army captain, a couple of German spies, and a scapegoating court trial after the blast. The disaster sequences, in which a ship loaded with TNT collides with another vessel in Halifax harbour, are relatively well done, considering it's a TV movie with a TV-movie budget. But everything before and after is plodding. although there's a certain Canadian earnestness to the whole affair.

I've read that the movie is historically inaccurate in many areas. There were no German spies in Halifax, the ships' crews did not behave as shown, and the trial that takes up much of part 2 involved different defendants and less drama.

If this shows up as a late night movie and you can't sleep, give it a try. It is not worth seeking out, however.

Super Reviewer
Alex r
December 3, 2013
Shattered City is a dramatized made for TV drama about the Halifax Explosion that occurred in 1917. The film uses a fictionalized aspect to tell this famous Canadian tragedy, and in doing so, it's lacking in trying to tell a good story, set against the 1917 tragedy. The story is decent, but it feels formulaic, and it's the standard plotline for a made for TV affair. The cast do a good job, but overall it does leave a lot to be desired. As a big history buff, I was heavily interested in the tragedy, and was unable to find an in depth documentary on the subject, so I decided to see this instead. Although the film tries to use a made up story to tell of its factual tragedy, this is worth seeing in order to spark interest in the subject, however it only serves as that. The film is entertaining for what it is, but it should have been much better due to the fact that the subject is captivating. The Halifax Explosion was the biggest recorded explosion before the atomic bomb, and the devastation was outstanding. Half of the city was destroyed and the explosions could be heard from miles away. Shattered City is good for what it tries to accomplish, but it never is a great film, and it suffers at times. Shattered City is good for what its, but it does fall short in some areas because the filmmakers added to much fiction an already interesting subject. For a made for TV film, Shattered City is entertaining, but if you're looking for a factual film, you'll be disappointed as this one has fiction mixed with facts to make it more appealing for viewers. Enjoyable, but it is a flawed film that could be done better by staying true to the facts.

Nicole S
November 17, 2009
good story telling and keeping to the facts with a bit of human drama added in