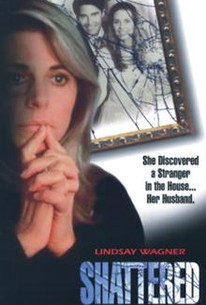 Shattered Dreams is a "based on a true story" TV movie starring Lindsay Wagner and Michael Nouri. Wagner is a Washington DC attorney; Nouri is her husband, also an attorney, but one with a profound violent streak. Suffering constant beatings, Wagner tries to keep up appearances, but after seventeen years of this treatment she can stand no more. Despite public opinion favoring her husband, now a powerful government official, Wagner successfully brings the facts of her miserable marriage out in the open, then sets about to reassemble her own fragmented life.

Kenneth Joseph James
as Reporter B

Cooper Layne
as Will Smythe

Robert Rigamonti
as Reporter A

There are no critic reviews yet for Shattered Dreams. Keep checking Rotten Tomatoes for updates!

I had to watch this for a class on Family Violence. I mean it was good enough for a Lifetime Television movie about domestic violence, it's hard to say I really "liked" this movie but it was fine for what it was.