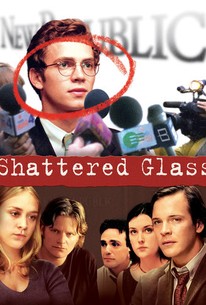 The true story of journalist Stephen Glass, the twenty-something whiz kid who quickly rose from a minor writing post in Washington, to a feature writer in such publications as Rolling Stone and the New Republic. By the mid-90s, Glass' articles had turned him into one of the most sought-after young journalists in Washington--until a bizarre chain of events suddenly stopped his career dead in its tracks.

Howard Rosenstein
as Suit No. 1

Pauline Little
as Monica Merchant No. 2

What Billy Ray's confident debut lacks in situational dramatics...it more than makes up for in the central performance of young Hayden Christensen...

Being a film about fibs, it is desperate not to tell any. Big mistake.

Ray propels the lamentable tale along at a brisk clip, is clear in his storytelling and mercifully avoids moralizing or self-congratulation.

Writer-director Ray has a no-fuss style that is quietly, thoroughly gripping.

[An] adept, often incisively funny recounting of the Glass debacle...

I did watch it at least twice in a row and then listen to the dvd commentary instead of doing literally anything else with my life...

Hayden Christensen and Peter Sarsgaard in the two main roles turn in career-best performances as their respective characters' descent/ascent is so cleverly played out.

Just as I was starting to wonder not only if I did really like Steve that much but also if it were possible that I was not even meant to, a story of his is challenged.

It's intriguing stuff that's heightened by the efforts of a seriously impressive supporting cast...

Using unexpectedly suspenseful character drama, "Shattered Glass" elevates itself to the upper echelon of journalism films. Unless there's ever a 24 famous enough to warrant biopic treatment, this will likely be Christensen's only great performance.

Perhaps the best exploration of American journalism this past decade has seen.

"Read between the lies." The true story of a young journalist who fell from grace when it was found he had fabricated over half of his articles.

REVIEW
A fascinating glimpse into the brain of a sociopath, all the more interesting as it's based on real events from 1997. Christensen has the lead role as the so-called journalist Glass, a far cry from his Anakin character of "Attack of the Clones" and "Revenge of the Sith." He hides behind a pair of thick glasses and adopts a strange, sickeningly sweet persona that, of course, hides a manipulative psychotic. That's the trick the actor manages to pull off - he has to get the audience to believe in and understand both sides of the character. A chronic liar, his fabrications become so involved and complex that they in themselves form a fascinating thread in the story. Most of Glass's tales have a small kernel of truth, but the majority is all made up. So he invents additional bogus material and fake evidence to back up the original fabrications, such as websites & voice-mails. It's like seeing a whole separate made up world created and co-existing with ours, all springing from Glass's warped mind. Glass also reminds me of more dangerous social misfits, such as serial killers, so a couple of scenes towards the end especially carry an extra chill. When Glass is found out, another interesting process which unravels his lies, Christensen shows us he really worked out the character. His desperation and seeming despair is alarming to behold and fits in with the character we saw in the first half of the film. The detective work done by Steve Zahn's character to begin finding out what's untrue is also very interesting to observe, and then Glass's own editor (Sarsgaard), new on the job, follows up on the groundwork laid out to finally deduce what has sort of been in front of them the whole time. Sarsgaard, a very good actor, is a standout juggling new pressures, mixed feelings and finally resolve to get at the truth. The film captured the real truth of what happened back then, based on what we can see of the real Glass on the "60 Minutes" interview.

What a really great movie! This is based on the true story of a guy who pulled the wool over the eyes of his employers for a long time. This was a very, very interesting story.

Would've made it to my faves list had it not been for its sloppy execution & poor acting by the lead actor.

1998: Stephen Glass worked for The New Republic Magazine. He was the youngest staff member of a team that was composed of 15 journalists/editors.

He wrote articles that entertained people, made them laugh, and raised the eyebrows of those that he'd written about. He attracted a lot of attention, and was very much liked by his co-workers. Until Forbes stepped in and asked for his sources for "Hack Heaven."

"The in-flight magazine of Air Force One... and their star goes out and gets completely snowed by a bunch of hackers?! "

Pretty interesting since it happened in real life, Ive seen way too many "prestigious" newspapers having incorrect info on their articles, or glossied up facts, but fiction after fiction, printed out as fact? Hey, you only get that from tabloids right? You cant possibly get those on political magazines and newspapers! Guess again!

Theres some intense drama here, awesome shouting scenes, perfect acting, even the blinking of the eyes for when youre lying is taken into consideration, the office scenes were the ones that I could really relate to, the good boss, the stiff boss, the clown, the tough chic, the suck up. It was all very easy to sink into. And damn, what a way to ruin a career!

Other movie info: Won 10 awards, including best actor, supporting actor and a special recognition for excellence in film making. (2003-2004)