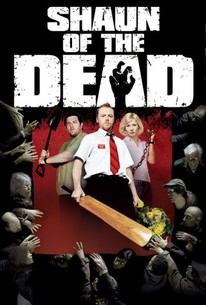 Critics Consensus: Shaun of the Dead cleverly balances scares and witty satire, making for a bloody good zombie movie with loads of wit.

Critics Consensus: Shaun of the Dead cleverly balances scares and witty satire, making for a bloody good zombie movie with loads of wit.

Critic Consensus: Shaun of the Dead cleverly balances scares and witty satire, making for a bloody good zombie movie with loads of wit.

Shaun of the Dead Videos

Shaun of the Dead Photos

It's often said that the true character of a man is only revealed in times of dire crisis, and for likable, lovelorn loser Shaun (Simon Pegg), that moment of reckoning came when the dead rose from their slumber to feast on the flesh of the living. A hapless electronics store employee who spends most of his spare time downing pints at the local pub with his roommate, Ed (Nick Frost), Shaun's life seems to fall apart when he is dumped by his girlfriend, Liz (Kate Ashfield), and his obnoxious stepfather, Philip (Bill Nighy), shows up to berate him for not being more attentive to his caring mother Barbara (Penelope Wilton) -- especially since he forgot to send flowers for her birthday. Things take a turn for the worse when the dead return to stake their claim on the Earth, and though the chaos that follows threatens to swallow up all of England, it's up to Shaun to keep his cool and prove himself once and for all by successfully rescuing Liz and his mother. With his trusty roommate by his side, nothing -- not even the living dead -- can stand between Shaun and the two most important women in his life. ~ Jason Buchanan, Rovi

Krishnan Guru-Murthy
as Himself

News & Interviews for Shaun of the Dead

View All Shaun of the Dead News

Critic Reviews for Shaun of the Dead

Shaun of the Dead is a cute, successful zombie spoof built on a central joke: if the undead actually came to London, supposedly turned-on town of nattering youth, no one would really notice.

It may only be April, but what we have here is pretty likely to be the British comedy of the year, its knockout final punchline planting a silly grin on your face that takes some while to fade.

Despite the emphasis on humour, Shaun shows its zombie movie credentials with some impressively gory special effects makeup and a willingness to despatch cast members in an exceptionally gruesome fashion.

Some scenes are too talky, too much like a sitcom, but whenever that threatens to sink the film, the zombies appear and save the day (if you see what I mean).

Mixing horror and humor is no mean feat, but Shaun Of The Dead tightens throats in fear without making the laughs stick there in the process.

The pasty, scruffy Pegg shows a surprising amount of range for the unlikely hero of a zombie flick.

A witty riff on zombie lore with plenty of gore to suffice, if you're a fan of comedic reprieve on a horrifying sub-genre, look no further than Shaun of the Dead, you won't be let down.

Shaun of the Dead provides all the basics of the Zombie Apocalypse genre and adds laughs to the mix.

It's no easy task combining comedy and horror into a neat little package but Edgar Wright provides a taut homage and self-aware parody without ever falling into spoof territory.

The best zombie comedy yet made.

This is a very funny movie, if you can stand the gore and the thought of your best friend being kept a zombie to play video games with.

It's up there among the best horror comedies of all time. [Full review in Spanish]

Audience Reviews for Shaun of the Dead

A very British, humorous take on the good old zombie topic. Not only is this full of great ideas, jokes, movie quotes and great laughs, it even works pretty well as gory splatter horror, even though you gotta laugh way too often to be really scared. Silly, but really lovable and just fun to watch, as long as some blood doesn't bother you.

Pegg and Frost are so funny together in this atypical zombie movie that nicely blends British humor and a lot of gore while making a smart social commentary, and it benefits from an incredibly witty dialogue and some hilarious moments to make you laugh hard.

Ambition-free retail manager Shaun thinks that being dumped by his girlfriend is the end of the world, until next morning when he wakes up to find that the dead are walking the earth. Brought to you by the same team who brought you Spaced, Shaun Of The Dead is a knowing homage to George Romero's Dead trilogy in which a zombie holocaust is seen through the eyes of a London slacker. Much beloved by many, this film is a bit of a case of rose-tinted memories; the highlights are actually hilarious, but there are rather less of them than you'd think. In fact most of the really funny lines happen in the first half hour, before the bulk of the zombie action when the Pegg and Frost double act are in full effect. The idea does run out of steam somewhat for the final half hour but when it's funny, it's very funny and it's actually rather better made than a lot of horror films that are meant to be taken seriously. Definitely worth seeing for the best bits, but perhaps not the masterpiece it's made out to be.

Edgar Wright's comedic zombie-fest provides a great blend of frights and laughs and a hint of drama in between. Simon Pegg's performance was nearly flawless along with Wright's swift direction, making Shaun of the Dead a bloody brilliant film. 4.5/5

Shaun of the Dead Quotes