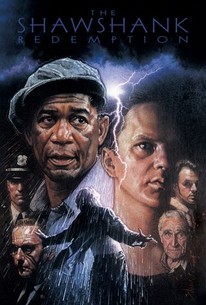 In 1946, a banker named Andy Dufresne (Tim Robbins) is convicted of a double murder, even though he stubbornly proclaims his innocence. He's sentenced to a life term at the Shawshank State Prison in Maine, where another lifer, Ellis "Red" Redding (Morgan Freeman), picks him as the new recruit most likely to crack under the pressure. The ugly realities of prison life are quickly introduced to Andy: a corrupt warden (Bob Gunton), sadistic guards led by Capt. Byron Hadley (Clancy Brown), and inmates who are little better than animals, willing to use rape or beatings to insure their dominance. But Andy does not crack: he has the hope of the truly innocent, which (together with his smarts) allow him to prevail behind bars. He uses his banking skills to win favor with the warden and the guards, doing the books for Norton's illegal business schemes and keeping an eye on the investments of most of the prison staff. In exchange, he is able to improve the prison library and bring some dignity and respect back to many of the inmates, including Red. Based on a story by Stephen King, The Shawshank Redemption was the directorial debut of screenwriter Frank Darabont. ~ Mark Deming, Rovi

News & Interviews for The Shawshank Redemption

Omari Hardwick’s Five Favorite Films
All 42 Fresh Movies and Originals Coming to Netflix in January
Which of These 19 Movies Should Never Be Remade?

View All The Shawshank Redemption News

Critic Reviews for The Shawshank Redemption

Cinematic alchemy of a kind that's all too rare, propelled by a supremely talented cast, a sumptuous score by Thomas Newman and a first-rate script and direction from first-timer Frank Darabont.

In the lead roles, both Robbins and Freeman are outstanding, layering their performances with snippets of individuality: Their small, daily sustenances and minor triumphs are wonderfully inspiring.

This is an engagingly simple, good-hearted film, with just enough darkness around the edges to give contrast and relief to its glowingly benign view of human nature.

Freeman, who is simply a great actor, a man who has never struck a false note in his career, both narrates this tale and anchors it with his authoritative playing.

Unmarketable upon box office release, Darabount's masterpiece tanked and seemed destined to obscurity. Only after the video release, did 'Shawshawk' reap the praise it so richly deserved. Is it one of the greatest films ever made? Without a doubt, yes.

The most overrated movie of all time still offers much to enjoy.

The entire cast of this movie is terrific with Robbins and Freeman leading the way.

It doesn't matter how we think we remember the moments, how they look now, in this edition, will force a shift in memory that we'll most likely be grateful for.

A masterclass in pretty much every category. An incredible script, wonderful direction, gorgeous score and phenomenal performances by Freeman and Robbins. Cinema doesn't get any better than this. [Full review in Spanish]

The film has a wonderfully structured script.

Audience Reviews for The Shawshank Redemption

Tender, funny, and inspirational, The Shawshank Redemption is a well-crafted prison drama and another great movie to add to Frank Darabont's impressive filmography. Morgan Freeman is the standout as one of the most endearing characters in cinema history, while Tim Robbins and a host of excellent character actors fill out an outstanding ensemble cast that make you feel like you are there with them in that prison. This is an emotionally satisfying film with many memorable character moments sprinkled into an otherwise pretty standard plot. While I find it to be a little too sensitive at times, this is an excellent motion picture and a must see.

It may deserve to be generally regarded as (one of) the most overrated film(s) ever made, but it is above all a wonderful, uplifting and deeply touching tale of hope and perseverance that certainly deserves to be remembered as one of the best adaptations of a Stephen King story.