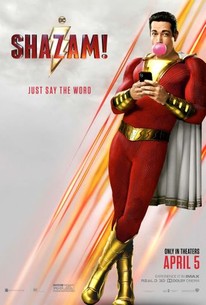 We all have a superhero inside us, it just takes a bit of magic to bring it out. In Billy Batson's (Asher Angel) case, by shouting out one word--SHAZAM!--this streetwise 14-year-old foster kid can turn into the adult Super Hero Shazam (Zachary Levi), courtesy of an ancient wizard. Still a kid at heart--inside a ripped, godlike body--Shazam revels in this adult version of himself by doing what any teen would do with superpowers: have fun with them! Can he fly? Does he have X-ray vision? Can he shoot lightning out of his hands? Can he skip his social studies test? Shazam sets out to test the limits of his abilities with the joyful recklessness of a child. But he'll need to master these powers quickly in order to fight the deadly forces of evil controlled by Dr. Thaddeus Sivana (Strong).

Ron Cephas Jones
as The Wizard

Cyndy Day
as Mom on Airplane

Carson Manning
as Board Member

Adam Rodness
as The Receptionist

Jesse Bond
as Father at Carnival

It's an interesting departure for Swedish horror director David F. Sandberg (Annabelle: Creation, Lights Out), who proves he has more tricks up his sleeve than just things that go bump in the night.

Pretty bland... A little too light, fluffy, and negligible.

Charming, high-spirited and embraces its youthful, goofy side.

Drawing from a wealth of material with more supporting Marvels and hangers-on than can be accommodated in one film, Shazam! picks and mixes with confidence.

The stakes in Shazam! aren't quite world-endingly high but are resonant for their universality, and the film bounces well between kid-focused humor and suitably scary action sequences.

It is going to do for the DC universe what Guardians of the Galaxy did for Marvel.

From the moment we meet the foster parents, you can start to feel this heartwarming aura just beginning to grow.

A blast from start to finish, at least when it's not bogged down in backstory.

Shazam! tries to tell two different stories, and although they're each entertaining on their own, the film would've been better served by figuring out which one it most wanted to tell.

Shazam! is as fun as they get and could be an indication of great things to come for the DC Comics universe.

This movie is a stew of secondhand powers, middling special effects, horror, and sentiment... and it is charming.

The main problem with this irregular superhero movie is that Billy and Shazam are like two completely different people, which makes it almost impossible for us to connect with the character, and it doesn't help that the goofy humor doesn't always work, despite some inspired moments.

It was not what I expected, honestly. There were some charming moments here and there, but this film is further proof that there are too many, unnecessary superhero films being made that are stitched together with poor scripts, lousy villains, and cliched characters. I am begging you: give me a good superhero movie.

If "Big" was a superhero movie, it'd be Shazam! This DC-Comics-adaptation swoops in with lighthearted humor and a surprising amount of heart thanks to its charismatic lead in Zachary Levi. The film is full-fledged fun and entertainment that is surely a surprise for 2019 as well as DC's slate of fluctuating films. 4/5

The films in the world of the DC Universe haven't exactly been smooth sailing from the beginning, but I would definitely say they've found their stride in these last few years. From standalone films like Wonder Woman and Aquaman, they're proving that taking a step back is sometimes the best thing to do. Shazam! is the latest film to be added to this collection of movies and while some may view it as incredibly cheesy, I believe the majority of audiences will find it to be an absolute blast as I did. Here's why, when Shazam! hits theatres, you should definitely seek out a screening of it. Following young Billy Batson at a very pivotal point in his life, after having lost his mother and jumped between foster homes throughout the years, he may have finally found one that works for him. Making friends with one of the foster kids in Freddy Freeman, he's interrogated about what superpowers he would love to have. Little does he know that he's about to stumble upon a magical wizard who will grant him numerous abilities and be able to turn himself back and forth between boy and man. This may sound silly and that's because it is, but it's all done in good fun and the story plays out very well on-screen. When going into a film like this, you need to know what you're in for, otherwise, you may find yourself cringing at the cheesiness of it all. Shazam! embraces its cheese and pokes fun at classic films that it's clearly borrowing from and even pokes fun at the fact that this film even exists in the same world as movies like Man of Steel or Aquaman. That being said, you absolutely don't have to see any prior films, because this movie truly does stand on its own, which was a breath of fresh air. In terms of pure enjoyment, this movie fires on all cylinders and hits all the right notes, being a near-perfect film for what it's striving to be. On the other hand, where I feel this film continuously took a nose dive was within the villain subplot. While Mark Strong gives his all here and commits to creating a great character, the certain characters around him and the burden that comes with the powers he has, felt very strange and out of place in my opinion. Aside from that, I really have nothing to complain about, but these things are very much present on multiple occasions throughout the movie and I wasn't a big fan of them. The idea behind them was interesting, but the overall execution just didn't quite work for me. In the end, Shazam! is a fantastic, comedic superhero flick, with a few minor weaknesses throughout. Zachary Levi as the leading man is the reason to see this movie alone, as his charisma and chemistry with Jack Dylan Grazer is absolutely amazing. Aside from a few annoying aspects, there is so much to love about this movie. I had a blast with it and I think you will too. I definitely recommend checking this one out when it hits theatres.