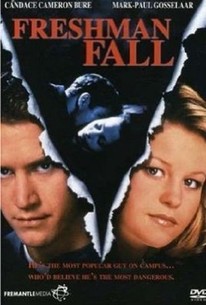 The cast of this made-for-TV melodrama is comprised almost exclusively of popular young TV personalities, virtually all of them cast radically against type. Candace Cameron Bure heads the cast as Melissa Connell, a shy college freshman who accepts an invitation to attended a party held by her brother's fraternity. Admidst the booze, tobacco and sexual intercourse running rampant during the festivities, Melissa is savagely date-raped by one of her brother's frat members, Scott Baker (Paul-Mark Gosselaar). Demanding justice for her humiliation, Melissa runs up against a conspiracy of silence, and can only stand by helplessly as her B.M.O.C. attacker is acquitted by a campus court. Still, she intends to get even with Scott--but first she must accumulate irrefutable evidence of his libidinous behavior. She Cried No made its NBC debut on September 23, 1996.

Critic Reviews for She Cried No

There are no critic reviews yet for She Cried No. Keep checking Rotten Tomatoes for updates!

Audience Reviews for She Cried No

Not bad TV movie. Not so pleasant topic as it begins with an out of control bunch of frat boys who are getting the younger female students drunk/drugged at parties so they can take advantage. Melissa (Candace Cameron Bure) is the sister of one of the frat boys, and when it happens to her, she decides to make a stand. This follows her struggles and the impact it has on her own life and that of her family. The movie is quite predictable, but the young cast are effective and, though this movie is from the 90's, it is still relevant in its message.

She Cried No Quotes