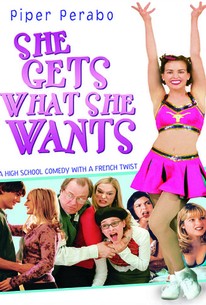 She Gets What She Wants Photos

Starla Grady (Jane McGregor), the most popular girl at Splendona High School in Splendona, TX, is on top of the world. That is, at least, until foreign-exchange student Genevieve LePlouff (Piper Perabo) moves in with Starla's family. Starla's parents had hoped that Genevieve's tutoring would help raise Starla's French grade, which had dropped dangerously low. At first, like Starla's other followers, Genevieve seems in awe of her charmed existence. However, when Genevieve's story of misfortune and lost love is featured in the school newspaper, Starla feels the winds begin to change. Before she knows it, Genevieve has stolen all of her best friends, her boyfriend, her position on the cheerleading squad, and her status as the most popular girl in school. Starla, not one to go down without a fight, sets out to expose Genevieve as the lying backstabber she truly is. Slap Her...She's French is directed by veteran thirtysomething actress Melanie Mayron.

Brandon Smith (I)
as Arnie Grady

Jerry Cotton
as Sheriff
View All

Critic Reviews for She Gets What She Wants

There isn't a minute's genuine satire in the whole squawking show.

This is more a case of 'Sacre bleu!' than 'Magnifique'.

...even if one were willing to overlook the downright aimless storyline, there's still the dearth of laughs and muddled character motives to contend with.

The humor is sharp and the satirical targets are mercilessly skewered.

Slap her - she's not funny! No French people were harmed during the making of this movie, but they were insulted and the audience was put through torture for an hour and a half.

[Mayron] manages to keep things affectionate even while she's sending things up higher than a full moon over Texas.

Takes one character we don't like and another we don't believe, and puts them into a battle of wills that is impossible to care about and isn't very funny.

A droll, bitchy frolic which pokes fun at the price of popularity and small-town pretension in the Lone Star State.

Clever and unflinching in its comic barbs, Slap Her is a small but rewarding comedy that takes aim at contemporary southern adolescence and never lets up.

If we're to slap protagonist Genevieve LePlouff because she's French, do we have that same option to slap her creators because they're clueless and inept?

Audience Reviews for She Gets What She Wants

I know this movie by the title "slap her, she's french". Absolutely loved it first time I saw it. A rewatch a decade later has not been quite so kind - it's definitely somewhat silly in its plot (funny i never noticed that the motivations actually made no sense). But it's still a fun, trashy watch, and even better now it has the nostalgia thing happening. I pretty much wanted every outfit Piper wears. I don't really know what that says about me. It's not like they were meant to be fashionable outfits. She's quite a geek initially. Piper Perabo really was a good actress. It's a shame she's not in much the days. Coyote Ugly is still an all time favourite of mine.

A brainless teen comedy to seat in from of the TV for a few laugh and to spend your spare time. This movie it is also known as "She Gets What She Wants". It also it is a teen remake of "All About Eve".

You cant knock the title...but the films not too bad either

She Gets What She Wants Quotes