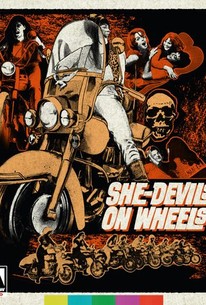 Critic Reviews for She-Devils on Wheels

It's short enough to stay punchy and connoisseurs of bad movies continue to cherish it.

She-Devils on Wheels is as poorly acted and directed as most HGL features, but its off-kilter sensibilities provide it with a modicum of interest.

And yet, somehow, abstract concepts appear much more clearly when glimpsed from the rock-bottom of human experience.

Nearly corny enough to be worth it, but not quite.

Audience Reviews for She-Devils on Wheels

Hershell Gordon Lewis' biker movie involves a female biker gang, which I thought was just awesome, and I really liked the ending too. It was the rest of the movie that wasn't so hot. The movie gets pretty boring in some scenes, and a lot of the scenes with violence seem to belong in a horror movie, which is what the director is usually known for. Overall, an interesting movie, but it's just okay, not great.

This film is a must for HGL fans that are in it for his style not just his gore. It has a lots of his charm, and badass biker chicks are always great to watch.