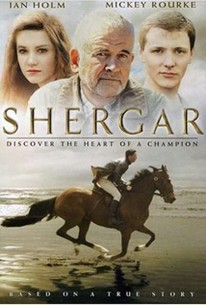 A boy-and-his-horse tale loosely based on the IRA's unsolved 1983 horsenapping of a Derby winner, this adventure film opens with the animal being abducted and brought to a farm run by Garritty (David Warner), a borderline IRA sympathizer. After Irish authorities refuse to pay a 5 million pound ransom, sinister terrorist O'Rourke (Mickey Rourke) orders the horse to be shot, but before that happens, the animal escapes with Kevin (Tim Walsh), a stableboy who has run away from reform school. Kevin and the horse are subsequently befriended by a tinker (Ian Holm) and his granddaughter (Laura Murphy).

There are no critic reviews yet for Shergar. Keep checking Rotten Tomatoes for updates!

There are no featured audience reviews yet. Click the link below to see what others say about Shergar!