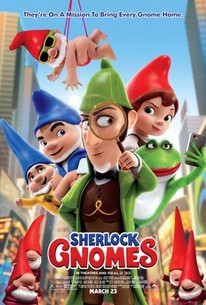 Critics Consensus: Sherlock Gnomes is sadly, utterly stumped by the mystery of the reason for its own existence.

Critics Consensus: Sherlock Gnomes is sadly, utterly stumped by the mystery of the reason for its own existence.

Critic Consensus: Sherlock Gnomes is sadly, utterly stumped by the mystery of the reason for its own existence.

When Gnomeo and Juliet first arrive in the city with their friends and family, their biggest concern is getting their new garden ready for spring. However, they soon discover that someone is kidnapping garden gnomes all over London. When Gnomeo and Juliet return home to find that everyone in their garden is missing there's only one gnome to call SHERLOCK GNOMES. The famous detective and sworn protector of London's garden gnomes arrives with his sidekick Watson to investigate the case. The mystery will lead our gnomes on a rollicking adventure where they will meet all new ornaments and explore an undiscovered side of the city.

Actually more fun than the original and guaranteed to make under-10s shudder with delight.

It's nowhere near as bad as it sounds...

After two films, this still looks and feels like a franchise driven more by commercial calculation than creative inspiration.

A passable, and very-kid friendly, animation which doesn't break the mould, nor overstay its welcome.

The only person who can possibly feel good about this whole mess is Elton John, who inexplicably once again licenses his songs for the soundtrack. Hope the checks cleared, Rocket Man.

It's a serviceable animated take on a well known tale that also happens to be a sequel. One could call it a movie solely for kids, but you can't even trust them being happy with the product.

Comes together better than any belated sequel to a mostly forgotten family movie probably should.

There'll be gnome complaints from the kids, at least, but the adults might start to think these are tales told by an idiot, full of sound and sort of funny, signifying nothing...

Clues make no sense to anyone but to Sherlock Gnomes who is simply used to move the plot forward. No drama, no stakes, no suspense. Boring and a complete waste of time.

I just found the movie kind of unpleasant.

Mediocrity is afoot in Sherlock Gnomes. When a number of garden gnomes go missing in London famous investigator Sherlock Gnomes takes on the case. Johnny Depp and Chiwetel Ejiofor join the cast but don't really add anything; giving adequate performances. And the humor is rather weak, as is the soundtrack (which was one of the highlights of the first film). Sherlock Gnomes is a lackluster sequel with a formulaic plot that just seems like it's going through the motions.