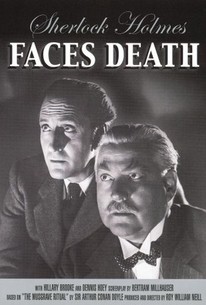 There are those who consider Sherlock Holmes Faces Death to be the best of Universal's Holmes series, though others hold out for 1944's The Scarlet Claw. Based loosely on Conan Doyle's The Musgrave Ritual, the plot finds Holmes (Basil Rathbone) and Watson (Nigel Bruce) being summoned to the Musgrave estate when several mysterious murders occur. By the time the mystery is solved, Sally Musgrave (Hillary Brooke), young mistress of the estate, has decided to donate her property to "the people" as part of the war effort, cuing another of Holmes' patriotic curtain speeches. The best moment occurs when Holmes suddenly realizes that the floor of Musgrave castle resembles a huge chess board -- a clue vital to the ultimate solution of the case. Peter Lawford shows up unbilled as an inebriated sailor.

Once the fireworks start, though, it's nonstop action and suspense, with a particularly ingenious ending that pits Holmes against the killer's ego.

There are no featured audience reviews yet. Click the link below to see what others say about Sherlock Holmes Faces Death!